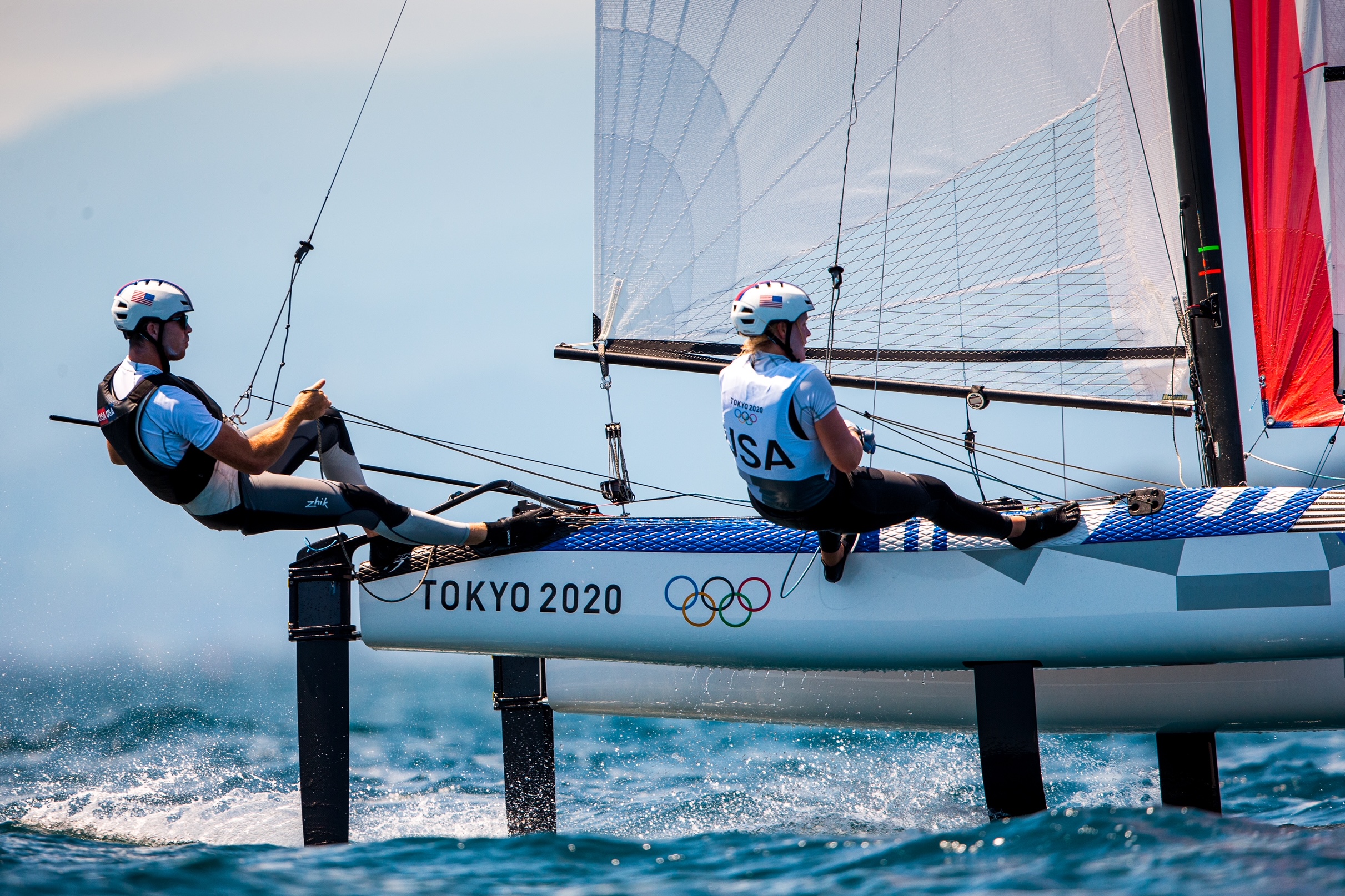 24-year-old Riley Gibbs just competed in his first Olympic Games, finishing 9th overall in the Nacra 17 with crew Anna Weis. He was fortunate to have plenty of distractions following the Games which mostly kept him from post competition blues. But a lull in his schedule due to a broken thumb incurred while racing in the recent Moth World Championships was an opportunity for reflection and contemplation. I caught up with him just as he arrived in Nice, France with a stunning sunset in front of him as he headed to meet the US SailGP team for the Saint Tropez event. Here Gibbs talks about his Tokyo experience and shares his thoughts about what’s next.

Where did your inspiration to be an Olympian come from?
RG: It’s been a dream of mine since I was young – for as long as I can honestly remember. I sailed Sabots in So Cal as a kid – when I was in third grade, I remember hiding Seahorse magazines under my history books on my desk, trying to read articles and looking at all the photos on the Games. I remember European teams came to Alamitos Yacht Club when I was a junior to train with Chris Rast. One team broke their rudder and threw it in the trash. My friend and I grabbed the rudder, cut it in half with a hack saw and each kept a half in our rooms – we idolized the idea of what it represented. Putting our fingers on the rudder itself was like a dream come true for us at the time – I’d say much of the desire to be an Olympian is internal.

What was the atmosphere in Tokyo like given all the constraints, and did it live up to your dream?
RG: Regardless of Covid, just being there and to be able to experience it for yourself is something that’s unmatched by anything else in life, I’d say. It’s something I’ve personally looked forward to my whole life and I have idolized anyone I ever talked to about it or had met who had gone to the Olympics.

In reviewing your performance, what worked, what didn’t?
RG: We were okay with our performance – we had trained hard in a multitude of different conditions, but we didn’t see many of those conditions we were expecting. The first two days were challenging for us being that it was short steep chop, 6-ft waves dropping off these cliffs – kind of like skiing. It was quite intense. We weren’t over the moon about our overall result but for our first Olympics and being one of the youngest teams participating I thought we did alright finishing 9th. It’s a nice stepping-stone to Paris 2024 which is how we are viewing it – a building process. Santi (Santiago Lange, Argentina) for example, is 59 and has been to four Olympics – that’s 16+ years of experience on us. It’s tough when you try to compare yourself to people like that. As much as you try not to, you end up doing that because it’s so much results-based and not so subjective.

What did you need more of to have won?
RG: More time and more resources. We had a really good group of people involved with our campaign – Sally Barkow is a great coach, and we had a lot of mentors like Mike and Stephanie Martin, Jay and Pease Glaser, and Howie and Julie Hamlin, our parents – you need a huge team behind you. The teams who made the podium have good funding, great teams behind them, as well as a lot of experience and time over us which you just can’t buy.

It’s no small feat and there’s a lot more that goes on behind the scenes. It’s not all fund-raising at a yacht club or deciding to go out for a 3-hour sailing session on a given day – it’s a full-time job and every quad becomes more professional. Talk to Paige or Charlie or Stu and Dave and other experience athletes on the team and they’ll all agree, “Wow, no-one partied this last quad – everyone was so serious!” We do joke around within the Olympic team to keep it light between racing, so those kinds of conversations come up. But it’s something to consider – 20 years ago when our coaches were competing it was different, and we haven’t even scraped the surface yet in terms of team dynamic and performance. It’s a lot more scientific now and we have the tools.

What was a racing highlight for you?
RG: It was looking back on the event and accounting for all our weaknesses. We didn’t know how we would stack up against the other teams because we hadn’t seen them in 14 months since the outbreak of Covid, but we did well against most of the fleet in certain conditions which was really nice. Our biggest weakness going into the Games was starting. The Nacra 17 is not like a FJ in high school sailing, or a Laser where you can just roll it over, or a J22 where you can roll tack it and use some kinetic energy to get it moving. You really need to learn time and distance and rotation and time. It’s quite tricky – the cord length on the dagger boards and foils are high aspect so you lose flow very quickly. But, according to the regatta and racing analytics that our R&D team puts together for us, we were one of the best teams in starting in the whole event – that was a shock to me because it wasn’t something we were too confident in!

How did it feel to come home to the “what’s next” situation?
RG: I had other events planned, the first being the recent Moth Worlds which was in Lake Garda, Italy, a few weeks ago. I was training for that soon after the Olympics finished. For better or worse I think that prolonged the state of depression (laughs) that some athletes get – your entire life has been working toward one goal for so long and it shouldn’t go uncelebrated. Anna, Sally, and I each had our own emotions tied to the end of it. Once I get home (Long Beach, Calif.) I’ll have time to decompress.

What’s next?
RG: The immediate future is kind of unknown but I’m really looking forward to getting with the SailGP team and learning as much as I can. Being involved with SailGP has really helped so much with the Olympics – you learn so much about professionalism, event logistics, teamwork – it’s amazing. What we don’t make in salary we definitely make up in exchange of knowledge and experience (laughs). I’m really happy to be part of it.

Planning for Paris 2024?
RG: Plans are on hold right now. Anna needs to finish school at Boston University, so we’re trying to give her some space. But that doesn’t mean that I’m taking my foot off the gas as far as campaigning goes – whether its R&D behind the scenes or sail development – any sort of niche to get one up on the competition we can get, I’m seeing it through and just waiting for Anna to come back! 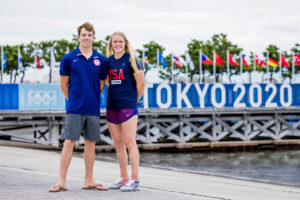