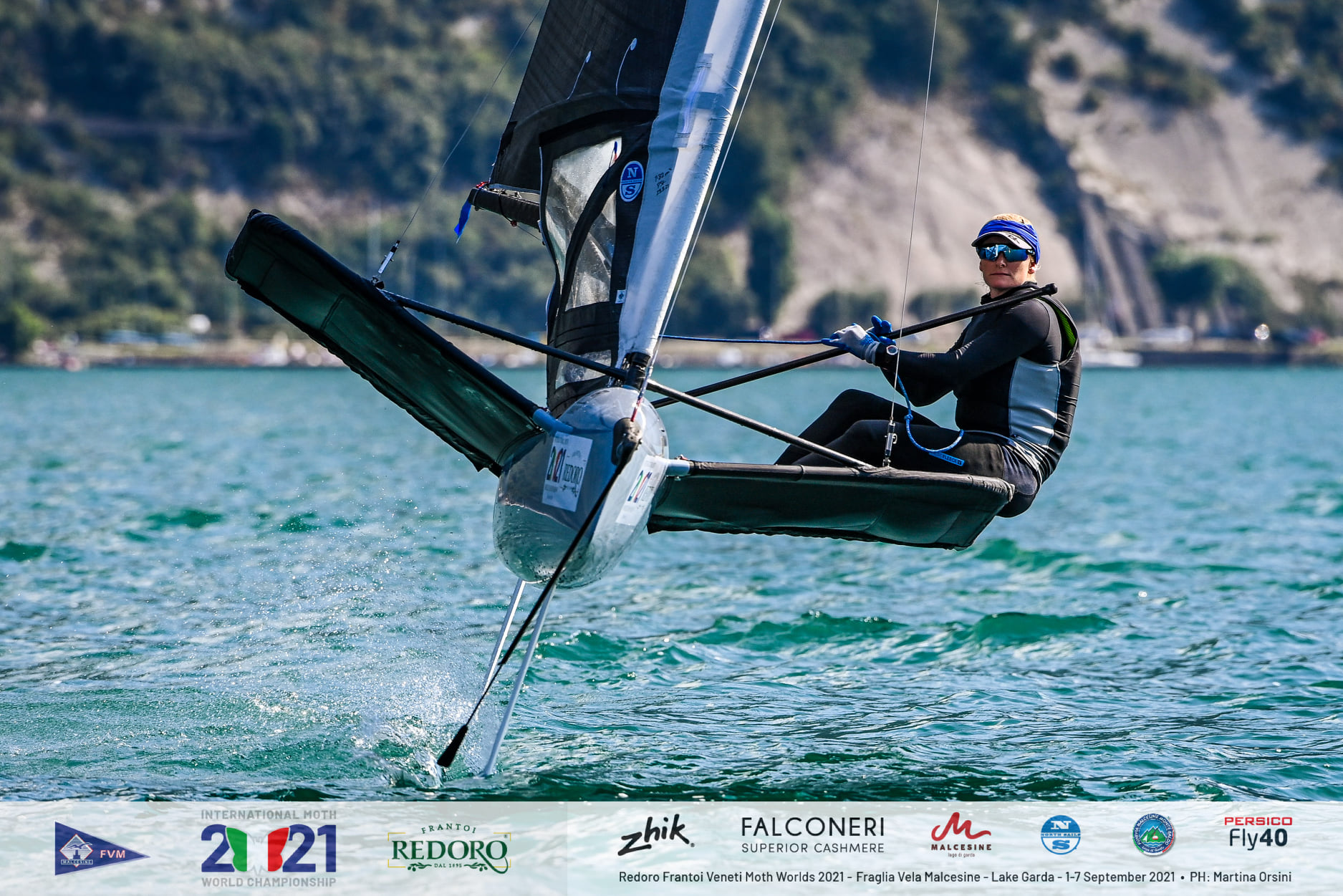 Helena Scutt recently completed in her first Moth World Championship, in Malcesine, Italy, finishing 80th overall and the 4th woman. Her worst races (discards) were the first two of the regatta which speaks to her improvement throughout the event. Overall, she was thrilled to compete and is excited to train hard for the next Worlds where her goal is to be in the Gold fleet (top half) and come out as the Women’s World Champion. Right on Helena! Below Scutt provides a snapshot of the event as it played out for her.

The wind during the Worlds was lighter than the US training group expected. In hindsight, we trained too much in strong breeze and survival-type conditions, rather than marginal foiling and light wind conditions. Light conditions at Worlds meant that for several races there were holes at the windward and leeward marks, and on the right side of the course, so there was a real premium put on getting foiling and staying foiling through maneuvers. I had the right foils for the conditions (note that the Moth is an open development class designed around a box rule), but my sail was underpowered (I have a reduced size because I’m relatively light) and my mast was too soft. This meant that getting foiling took longer than it could have, and I left some light wind downwind boat-speed on the table.

Even just comparing the first and second days of the qualifying series, I averaged almost 14 places better each race on the second day as I figured out starting in a big fleet, some nuances of the racecourse, and improved tactical decisions. I was so happy to be back racing in a big fleet again, it was such an awesome feeling. For the most part, racing skills that I feel like I haven’t used since Olympic campaigning came flooding back to me, “like riding a bike”.

I attended one day of the Women’s Moth Clinic (organized by the International Moth class) before racing in the Italian Series, a two-day pre-Worlds regatta which proved to be invaluable practice for starting and big-fleet Moth racing. For both qualifying (two days) and finals (Gold fleet & silver fleet, 3 days), the Worlds was divided into two fleets of 71 boats each.

The level of the fleet is so high, it’s impressive and inspiring. My gains will come from improving boat-handling (especially tacks), starts, and getting equipment better suited for a range of conditions. I’m really pleased with how much my starts improved during the event, because by the end I was getting clean starts at the pin. Moth starting is very different, even from other high-performance boats like the skiffs and Nacra17, because everyone is foiling and reaching down the line in a high-speed train well before the starting gun.

The US Moth class, and particularly the West Coast group, held a Zoom debrief open to all US Moth sailors to maximize the lessons from the event and build a plan to best prepare us for the next Worlds. Despite all my training over the spring and summer, I must keep in mind that most the sailors at the top of the fleet have been sailing Moths for the better part of a decade, and I have only done one season. The next Worlds in Argentina in November 2022. We could have strong breeze and short, steep chop, so we’re looking forward to some Berkeley Circle training for that!

My role in the Moth community is fun and gratifying. I look forward to hosting Intro-to-Foiling clinics in the Moth and the Waszp this fall, winter and spring, to get more Moth sailors, and particularly women, introduced to the class. Out of 142 competitors at Worlds, 12 (8%) were women, which was a record-breaking year. We look forward to continuing to build momentum for women’s participation and success in the Moth. At the International Moth class AGM (held during the Worlds), I was elected Vice President of the International Moth class. Some of the changes we have already made:

And it’s just the beginning! 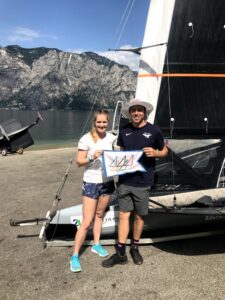 I am so grateful to the St Francis Sailing Foundation for its support of my racing and my participation at the 2021 Moth World Championships. Thank you!

*StFSF grantees Helena Scutt & Riley Gibbs Moth Worlds 2021. Gibbs competed but couldn’t finish the regatta as he was injured in a crash ten minutes before the start of the first Gold fleet race.