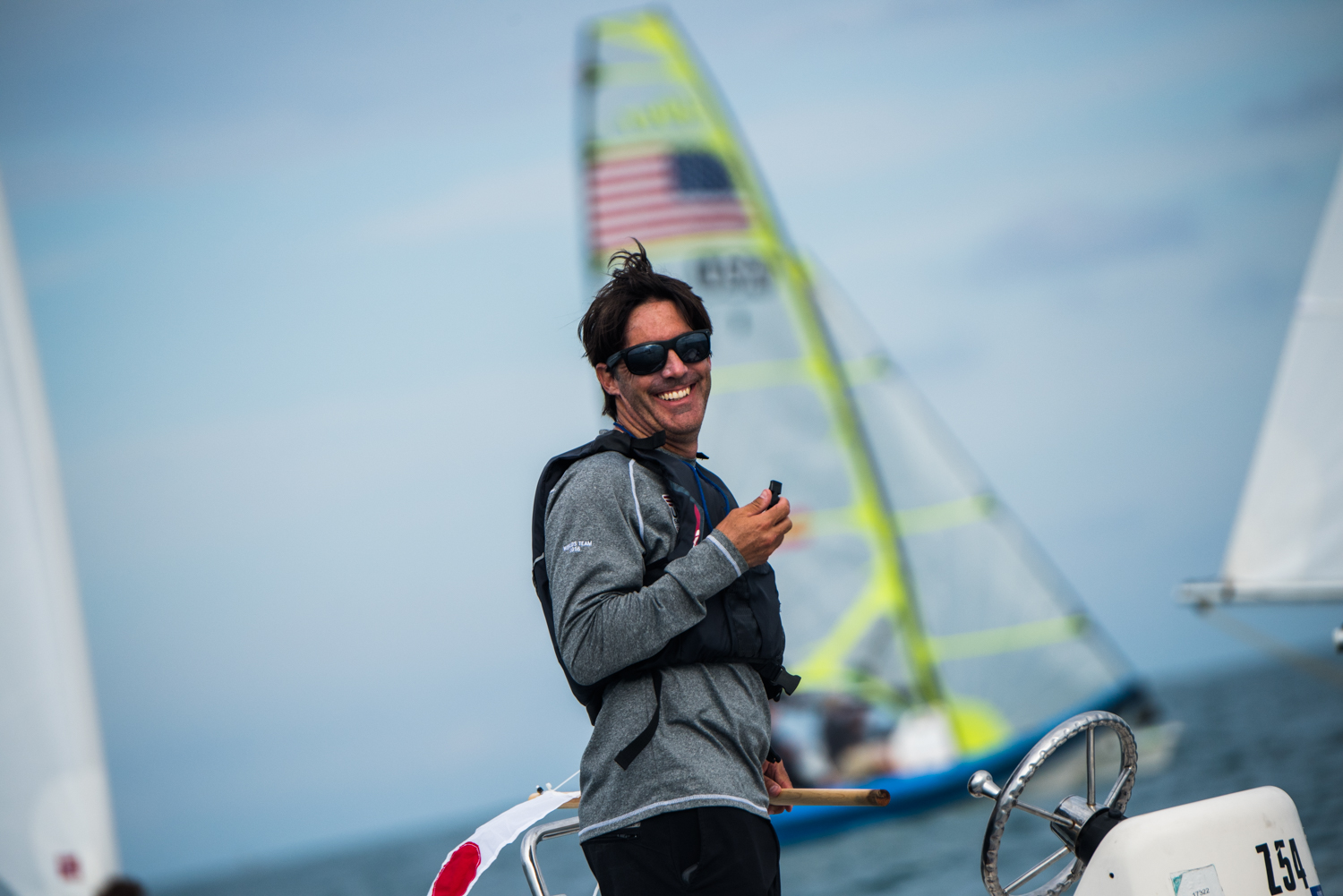 “I grew up on a farm in Argentina, I’m actually a farmer!” Leandro Spina laughed with his characteristic enthusiasm. Spina, Olympic Development Program Director at US Sailing, played multiple sports as a kid and by luck discovered sailing when he was 14 years old. He fell in love with it immediately.

“I loved the freedom of being on the water and all that goes with that, but I also had to figure out how to get better from this little town with a little lake near our farm,” he smiled.

To sail with better sailors, at fifteen years old, Spina, 47, started taking the train into Buenos Aires where there is a massive river which looks like an ocean – the Río de la Plata – and where the best sailors in Argentina sail. It was about a three-hour commute either way, just for Spina to become a better sailor.

“This is how I would move forward in this sport for the next thirty years – I have always looked for the next opportunity to grow and get better.” 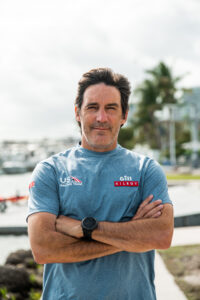 Spina likes to share this story because it set the stage for his future as an elite sailor and coach, which ultimately led Spina to lay the foundation for US Sailing’s Olympic Development program which is fast becoming the cornerstone of elite youth sailor development in the US.

Spina sailed and raced on everything, traveling internationally to represent Argentina. He sailed Optis, Snipes, keel boats, he learned to crew on big boats, he sailed the J24 in the 90’s when the class was one of the strongest in the world, and he also did some 470-sailing including multiple Olympic trials.

Spina was working in Miami when 9/11 happened which forced him to switch gears workwise. He turned his focus to professional sailing and coaching. By 2008, he was involved in many classes as a coach – the Star, TP52s, Optimists, A-Cats, the Tornado, and had a desire to support athletes because their stories often mirrored his own, that of finding opportunities to make things happen.

“I am very passionate about athlete development,” he acknowledged. “When the US Olympic program asked me to join in 2009, I said I’d only if they would let me create a development program. I was excited to create a missing piece of the Olympic pathway for our upcoming young talent.”

At the time, Spina notes, there was little structure in place to identify talent, bring those sailors together and offer them top-level coaching. While it is a seemingly simple formula, in a country the size of the US where sailors are spread far apart, it was a challenging mission. But once the program got rolling, Spina saw that the bar began to rise quickly at the youth level.

“We focused on the under-19 group because I was a firm believer that we needed to change the DNA of our athletes at a younger age, before they go to college and start an Olympic campaign – I want to come in early to ensure they have a strong foundation. The goal of the ODP was always to support the transition from youth sailing to Olympics.”

Seven+ years down the road, Spina and his team have developed excellent best practices in the ODP and truly have a machine going. The success stories among youth sailors have been multiplying. The next hurdle was transferring that into the Olympic classes, and in Spring 2021, Paul Cayard took the helm of the US Sailing Team, inclusive of the US Olympic Sailing program, as Executive Director of U.S. Olympic Sailing.

“Thanks to Paul’s leadership, we have more focus on performance and are truly a performance driven team now,” Spina noted. “We have more supporters thanks to Paul and with more support the athletes can be more efficient. Even with the shorter timeline of this quad I think we are making big improvements quickly because of this focus and additional assistance.” 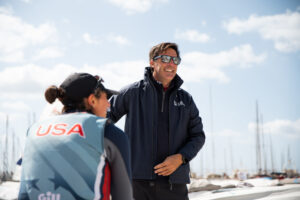 Another layer that Spina references is domestic training, an important element of ODP best practices: doing most of the work at home instead of just chasing the international fleet.

“We now have a domestic platform that people can enter at their own pace at any given time – regattas like the West Marine US Open Series that have been held in San Francisco and other places, they are crucial because now the sailors do not need to go to Europe to start an Olympic campaign, they can attend ODP clinics and multiple domestic regattas,” Spina commented. “We accomplished this during the pandemic: when everybody froze, we took a big leap forward, and now it is much easier to make gains than before.”

Cayard concurred, “The West Marine sponsored events are a great series of races that allow our athletes to get racing competition in the US/domestically which is critical to building a solid foundation of skills before our athletes spend valuable time and money to travel abroad. These events are also great for motivating the next generation because they can see the top athletes, rub shoulders with them, and go sailing with them. And, we will have domestic trials leading up to Paris 2024 in maybe six or seven classes, in December 2023 and spring 2024.”

These clinics and regattas are now regularly held all over the country, thanks to organizations like West Marine and other supporters like the St Francis Sailing Foundation. For a long while ODP clinics were heavily favored on the east coast due to Miami being the hub of the US Sailing Team’s training. ODP clinics were occasionally hosted by the St Francis Yacht Club, taking advantage of the opportunity to hold heavy weather clinics on the famed San Francisco Bay. But west coast youth sailors were still missing opportunities to become part of these clinics.

Pam Healy, president of the St Francis Sailing Foundation, and Sailor Athlete Director for US Sailing, worked with Spina to open opportunities to west coast kids and kids who were not quite ODP level.

“I convinced him to let the kids participate in the ODP if they brought their own safety boats which made it easier for him to include our kids including those who were not ODP level but right below it,” Healy explained. “Leandro saw how much work they needed to do, whether it was to build their confidence, or to learn to stand on their own feet, for example, and it resulted in the ODP opening up even more doors for talented youth sailors.”

She added, “It’s fun for people to learn about the ODP which is working year-round to bring up the game in the US – the goal is to podium in every class in 2028 – I know they’re working very hard toward that.”

Spina’s encouraged by the successes that current US Olympic hopefuls are already experiencing.

“It takes time to get to the top, but we are on the rise, some results are exciting and proving that we are on a good track. My focus is not on the number of medals we win but to show the younger generation the path to success and that we can do it: the process and giving that confidence to our athletes that we can compete.”

When asked if he had just one more resource at his fingertips that he could tap into for US Sailors, Spina was quick with his response.

“I know this sounds cheesy, but it would be time,” Spina laughed. “Unfortunately, we cannot buy time and it’s the same for everyone else. But we’re on a very good track and I know we’re going to succeed but it takes time. If we lose momentum, we cannot get it back. We have momentum and energy right now. I started from scratch – from nothing – the classes that we are now competing in in the Youth Worlds were nonexistent in the country. We had to change the culture and we had to prove that we could succeed.”

And what is Spina most excited about for our sailors in Paris 2024?

“I’m excited that we are rising to the top, we are getting better. It’s going to be a good opportunity to show that we are on a very good track. I think the sailors are starting to feel it too, they’re gaining confidence. I think it’s going to be very good for those who go to the Olympics and for everyone who stays home with the next Olympics being in Long Beach in 2028. I’m excited about the momentum.”