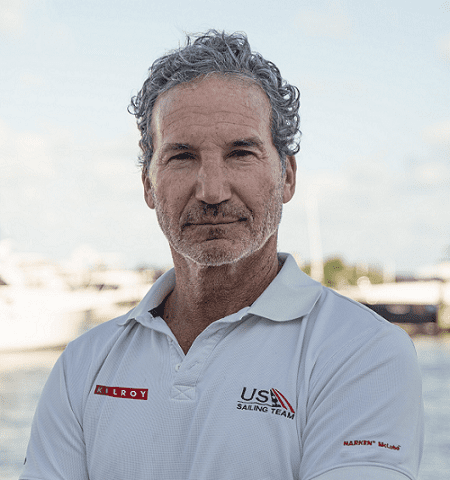 Los Angeles will host the summer Olympics in 2028, and for Paul Cayard, U.S. Sailing’s new hire, that’s a perfect goalpost for the role he’s recently stepped into as Executive Director of U.S. Olympic Sailing, taking the helm of the US Sailing Team inclusive of the U.S. Olympic Sailing program.

Cayard’s an Olympian, he’s been around the sport for a long time, and maybe this role will in some way put the finishing touches on what has been a hugely rewarding and successful career. While he may not be young enough to go to the Olympics anymore, or to race an America’s Cup boat, he has a lifetime of the right experience and he’d like to help others achieve their dreams.

“I feel like I can be successful at this job and as an American sailor, that would be very satisfying,” Cayard explained. “It’s in my wheelhouse – the industry that has been my career – and it’s a challenge that inspires me and has captivated me. The job has been hard to do, there have been various efforts at doing it in the last 10-12 years and we haven’t quite got there. I know we can be successful.”

As Cayard noted, the U.S. is still the most medal-winning nation in Olympic Sailing although over the past 20-30 years the trend line has been down.

“We’ve been at the top of the sailing world – in 1984 in Los Angeles we won three golds and four silvers in 7 events,” Cayard said. “America can be competitive again, but the mission is really much broader than just the Olympics – we need to re-invigorate American sailing. The Olympics is the lightning rod for that.”

What exactly is he hoping to accomplish? The role, as he sees it, is to bring America’s absolute best resources to bear on the U.S. Olympic Sailing program. The desired outcomes of this strategy? To dominate the Olympic podium and create a deep bench of world class sailors, who, in turn, lead the country’s high profile team’s and inspire a nation.

By building excellence across a multi-pillared structure – coaching, technology, elite athleticism, leadership, and organization – that structure becomes the machine responsible for developing a pipeline of talent; the machine will deliver the excellence to the field of play through the coaches and athletes.

“My job is to build that machine that’s in the middle between the pillars of excellence and the field of play,” Cayard explained. “In America we have access to the excellence, but we haven’t succeeded in bringing it to bear on the field of play. It involves understanding where we want to be, where this excellence is in America, and hiring the right people with the right skill set.”

Fundraising will be a significant part of Cayard’s role as the financial element will be key to achieving the result that Cayard wants. It’s no secret that American sailing athletes simply haven’t had the financial resource that other leading sailing nations have had in the past 20 years.

“In the U.S. we still operate in the “bring your own” model,” he said. “With the financial resource we have now we can’t change a lot,” he said. “The team that’s in place is doing a pretty good job with $4 million a year, but there’s just not a lot you can do with that. I need to be that passionate, inspirational person to make a credible pitch to get the additional backing we need.”

A critical element in the pipeline that lives alongside funding is talent and to reset America as a dominant sailing nation, Cayard envisages that the machine will, year in and year out, produce a pipeline of 5-6 teams deep in world-class talent in the ten Olympic classes, so 40 or 50 teams of athletes that are truly skilled not only in sailing but who know how to be dedicated, committed, focused, disciplined – all the personal skills that it takes to be a great athlete.

In 2014, Cayard and the late Bob Billingham envisioned a critical piece of the puzzle; a pipeline of talent. Project Pipeline, which was founded with the support of America One, Cayard’s 2000 America’s Cup campaign, put up $5 million to train America’s most promising 15-19 year olds. In 2017, 2018, and 2019, the U.S. was the lead nation at the Youth World Championship over that period, taking a third, a first and a third.

“Creating the talent pipeline isn’t like a switch that gets flipped on and suddenly a bunch of talent appears,” Cayard reminded. “Fortunately, Project Pipeline is beginning to bear fruit – in just a few months, the oldest alumni of that group, Riley Gibbs (24), will be going to his first Olympics in the Nacra 17. He’ll probably be in his prime in France in 2024, and definitely ready to take Gold in 2028 in Los Angeles.”

Cayard advocates a much broader domestic platform for athlete training. “We’re not going to send our athletes to regattas all over the world when they’re not ready to go,” Cayard determined.

He expects the U.S. Open Series, a new circuit of 6 Olympic Class regattas, developed with West Marine and slated to be held annually, will help develop depth in the pipeline. The series consists of three regattas in Florida in winter and three regattas in summers in San Diego, Long Beach and San Francisco. Additionally, the heavy weather Olympic Development Program will continue to be held in San Francisco.

Cayard’s acknowledges the support of Bay Area organizations which have been particularly strong supporters of Olympic sailing, in particular America One, and the St Francis Sailing Foundation.

“No other area in the country supports Olympic sailing like the Bay Area,” he noted. “I’ll continue to work with President Pam Healy and the Foundation to support our Olympic athletes and those aspiring to be Olympians. The recent generous Beth DeAtley gift demonstrates the kind of support that has been going on for a long time in the Bay Area.”

“I will make myself available to speak to people, spread the world and get people more engaged,” Cayard said. “There are many interesting stories among our sailors, like St. Francis Yacht Club member Nikki Barnes who just won the 470 trials. A lieutenant in the Coast Guard, she and her crew busted their asses to win the recent Trials and finish so well. The last time they raced in the Worlds in 2019 they finished 32nd, and now she finished 7th. Suddenly, this team has an outside medal shot and we thought we were nowhere in the Women’s 470. It’s a hopeful AND interesting story and I think donors would love to hear those kinds of stories.”

Cayard maintains that mentoring is also a big part of athlete support, grateful to those who helped establish his skills and career. He feels fortunate that Tom Blackaller latched onto him all those years ago, asking Cayard to sail with him first in the Star, then in the America’s Cup.

“During the time I was with him, from age 18 to 28, Tom taught me the finer points of racing, strategy and tactics – he was a huge mentor for me. Raul Gardini (Chairman of the syndicate that sponsored the Italian America’s Cup contestant Il Moro di Venezia), was also an important mentor for me too, less in sailing but more in organization, leadership, delegation and how to run a bigger operation.”

“To win we need to garner all forms of support, financial, mentoring, and to focus on organization, technology, elite coaching, high performance athleticism, and our athlete pipeline,” Cayard concluded. “The U.S. is the top nation in all these critical categories. What we haven’t done is bring that excellence to bear on the field of play through our talented athletes. But that is what we will do by 2028 in Los Angeles. Tokyo and Paris are great intermediate milestones for us to measure our progress.” 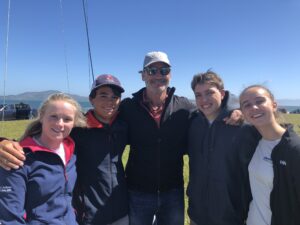