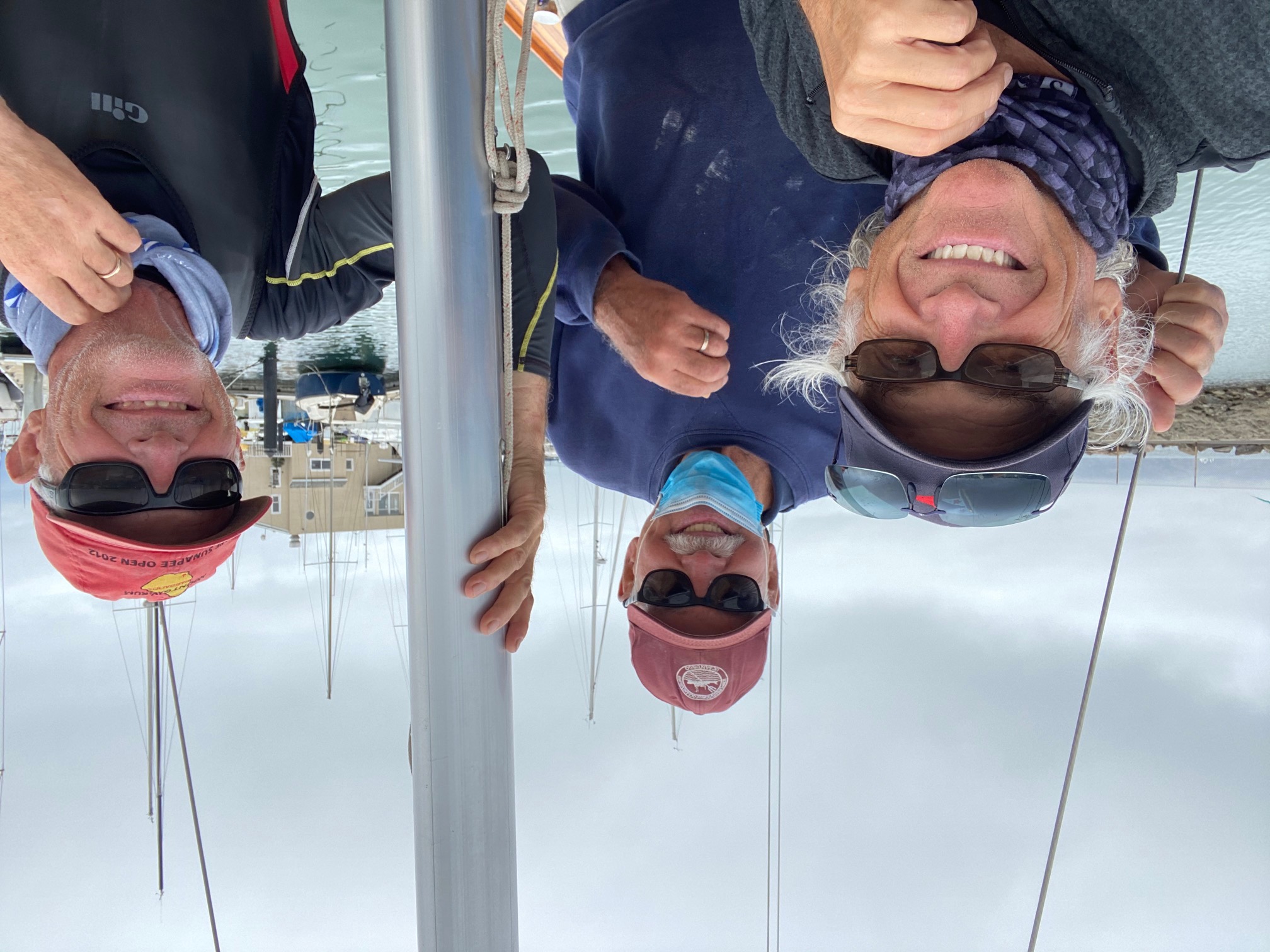 People buy boats all the time and ultimately, many owners leave them sitting in a slip in some marina somewhere dreaming of the day when they will find the time to go sailing. Bill Kreysler, by his own admission, is no exception. Finding time to sail a boat he bought 25 years ago has been an enigma to him for years. But these past few months he’s finally gotten his beautifully restored Knarr – Murano – out on the Bay thanks to a group of Knarr enthusiasts who have been meeting on the water to sail their boats under Covid-safe conditions.

Kreysler’s boat was formerly owned by an acquaintance who was ready to get rid of her. She was in pretty bad shape, leaking with a couple of holes in the deck. Kreysler suspects she had even sunk a couple of times at the dock. Nonetheless, his interest was piqued as he’d always been fond of the classic Knarr, a 30’ Bermuda-rigged, long-keeled sailboat designed in 1943 and traditionally built in wood.

“I would often sail out of San Francisco Yacht Club for Star regattas and there were always Knarrs out sailing,” Kreysler, a Terra Linda resident, recalled. “I would think, “that’s about the prettiest little sloop I’ve seen!”. There is something about the lines which are just the right proportion.”

Years went by and Kreysler had only ever sailed one a couple of times before he offered to buy the leaky old Knarr from his buddy.

“We made a deal that if he could get it up the Petaluma River to my workshop, I would give him $500 for it,” Kreysler laughed. “He got a friend to tow him up the river and I think if my shop had been another 100 yards upriver, the boat wouldn’t have made it.”

Kreysler pulled the boat up alongside the wharf at his shop where he had a small crane to lift her out of the river, but she was completely water-logged. The process took about a week to get the boat up onto a cradle where she then literally fell apart.

“My dream of, at the most, nailing some plywood on the holes on the deck, getting a coat of bottom paint on her and going out racing kind of disappeared and it was the beginning of a three-year complete total restoration project,” Kreysler smiled. “I think I could have built a new boat for less money and time, but it became kind of a labor of love.”

The result was essentially a new wooden Knarr, and for the first year or so, Kreysler raced the heck out of it. A Star Class world champion in 1966 alongside sailing partner Don Trask, Kreysler had grown up in San Diego sailing Sabots, the Finn and Lightnings in addition to the Star which he also campaigned with Trask for the 1968 Olympics. He’s a guy who lives and breathes the world of sailing, he’s active in the St Francis Yacht Club and an avid support of youth sailing but after that first year of racing his beloved Knarr, he simply couldn’t find the time to get on the water.

“For whatever reason I didn’t sail her the second year, that year went into third year and every year since, the boat has sat in the marina unused,” he said. “And, every year I take her to KKMI ((the Keefe Kaplan Maritime, Inc. boatyard), haul out, do the bottom – that’s been her big annual cruise!”

Recently, sailing friends convinced Kreysler that it was time to fire Murano up again and join other Knarr enthusiasts who have been enjoying short-handed, informal, non-club-organized racing.

“It’s just a bunch of avid Knarr sailors going out for a sail and somebody on the beach with a gun to start us,” Kreysler commented. “It’s been an absolute blast.”

The Knarr fleet is known for its capacity to draw elite sailors, so how does it work racing casually yet with a bunch of highly competitive sailors in a loosely organized, non-officiated manner?

“It’s amazingly low key – it’s like sailing was when all of us learned to love it, just plain fun,” Kreysler stated. “In fact, it’s so low key that there’s nothing left to do but have fun. Sure, there are some serious guys and Olympic medalists who race these boats, yet I would bet that they would say the same thing. It’s like going back to the 60s when somebody stood on the yacht club deck with a whistle and held up a blue flag.”

With the Bay sailing season winding down, last weekend the Knarrs sailed the last of its informal summer series. Don Jesberg, a Mill Valley resident, and his crew have been leading the fleet on Viva, a Knarr he bought last fall, and like Kreysler, needed to restore the boat for race-readiness.

“We spent from last November to July re-building Viva,” Jesberg said. “It cost an arm and a leg then another arm, but we’ve been sailing the boat for the past two months and it’s just been fun. It’s truly casual, a guy on the beach with a count-down, then we sail out to the mark and back”.

Jesberg, who has owned and successfully raced all nature of boats, `thoroughly enjoyed the opportunity to be on the water during this unusual sailing season and his intro to the Knarr fleet. Moreover, Viva took first overall in the Informal Cup Regatta, the result of the last three race days of the series.

“The fleet is about the people, they know how to sail, how to share and how to have fun – whoever shows up, shows up, it’s completely un-organized” he commented. “We’re all racing the same kind of boat – it’s all strict one-design. They boats are simple which is also handy and there’s no complicated formula to make it better, you don’t have to worry about an arms race. It’s a breath of fresh air.” 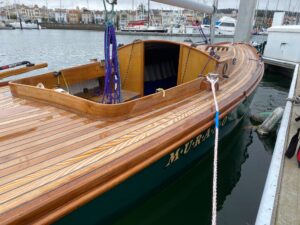