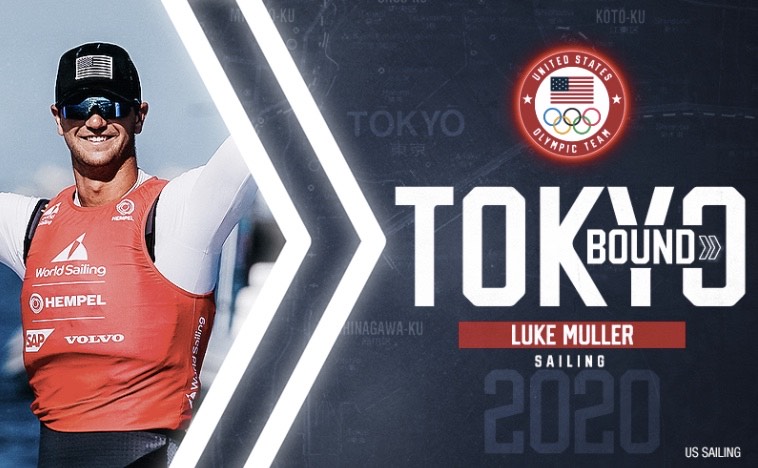 US Sailing has announced the conclusion of the Olympic Games Tokyo 2020 Athlete Trials in the Finn class, giving leading U.S. athlete Luke Muller, 24, a place on the 2020 US Olympic Sailing Team. Luke earned selection thanks to his performances at the 2019 Finn World Championship and 2020 Hempel World Cup Series Miami, where he placed 17th and 3rd, respectively. This will be his first Olympic Games appearance.

Currently based in Houston, TX, Luke’s been hunkering down and focusing 100% on improving with training partner Eric Anderson and is thrilled that the deal is sealed. He was leading other US Finn hopeful Caleb Paine by seven points after the first two trials events. The final selection event was to be held during the World Championships in October but when the EU decided to cease allowing Americans into that region due to COVID-19, the selection process was amended and thus ended early.

“I had a good lead and I was confident of my success following those first two events but knowing that it’s now the real deal, it feels really good and I am overjoyed,” Luke said. “Now I can focus on improving and getting as prepared as possible for the Games.”

It’s not an easy time in the universe to keep one’s head in the game for Tokyo but Luke is taking the status quo in stride.

“I’ve been really trying to remain optimistic and focus on the fact that I have that extra time to refine my craft,” he explained. “The result is not the only thing that matters – I really enjoy getting better at sailing Finns. Having extra time is an opportunity.”

Luke and Eric have figured out a physical distancing system to continue working during this time with coach Luther Carpenter who resides in Houston.

“Eric and I are living together while in Texas, and I really only interact with him,” Luke noted. “We’re lucky enough that Houston Yacht Club has a large space and we don’t need to come in contact with anyone in order to train here. We carry all our water and food instead of on the coach boat. Every two-weeks we pay $5 for curbside groceries so we don’t have to go inside.”

The pair have devised a system so that at the end of the day Luther gives them video through his car window – they exchange all their video and photo files that way. When they get home after training, they do a video conference and exchange notes. The system keeps them isolated so that they are able to remain safe and effective.

“We’re doing the best we can with the resources we have,” Luke said. “It would be time-costly to move somewhere else right now, so we plan to finish out this block of training before we leave.  Houston was relatively safe when we got here but as things worsened, we got more disciplined and took the virus more seriously. We want to avoid contributing to the spread and we want to stay healthy to maximize time on the water. It is not what we are used to, but it isn’t too inconvenient either. We are lucky to be on the water.”

With his selection to the Team, Luke would like to close out his fund-raising gap and raise his budget, noting that his supporters have been very understanding that the Games postponement has been hard for athletes.

“I have a very dedicated and supportive following which I’m really grateful for, including the Foundation,” he said. “With the announcement that I’m on the Olympic roster, I’m hoping that improves my support.” 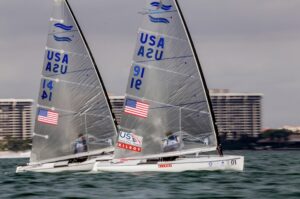 ABOUT LUKE
A member of the US Sailing Team for the last six years, Muller has progressed significantly since finishing college at Stanford University and shifting his focus to a full-time campaign in the Finn. In 2016, he served as training partner for Caleb Paine (San Diego, Calif.), who went on to win the Bronze Medal at the Rio 2016 Olympics in the Finn class.

Muller is a three-time World Cup medalist, two-time National Champion, and is currently ranked among the world’s top 20 Finn sailors. Some of his career highlights in the Finn include, 3rd place at both the 2019 and 2020 Hempel World Cup Series Miami, 9th at the 2017 Kiel Week Regatta, and 4th at the 2017 Sailing World Cup Miami.