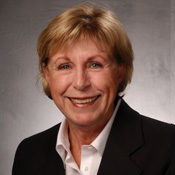 This past week the sailing community lost Paula LeRoy, a dear friend and devoted member of the St Francis Sailing Foundation. As the supportive wife of Founder and President Emeritus Bill LeRoy, Paula was involved with the Foundation since its inception in 1985. During the past fifteen years Paula worked tirelessly on fundraising campaigns for the Foundation. She and Bill organized the first Foundation fundraising event, a boat show at the StFYC harbor, a huge success and just the beginning of many events Paula was involved in, including each of our 14 auctions, organizing the silent auction displays and soliciting many unique auction items from her many friends in the yachting community. She served multiple years in roles of Director and subsequently Advisor, providing many creative ideas during her tenure. In 1993, Paula was honored as StFYC Yachtswoman of the Year.

Paula was a fun and funny person who will be sorely missed. She had many friends in our local sailing community. Paul Cayard, an early recipient of Foundation support as a junior member of the club in the early 80’s, later worked with Paula on many of the auctions and will remember her as loving and compassionate beyond words.

“Paula was a standout lady, smart, productive, dependable and a doer. She really loved her Bill and in his times of need, she was there for him in spades. They were an inspiring couple to the next generation.”

The LeRoys loved their sailing and raced several times to Hawaii on the Pac Cup. As Paul recalls, during the lead up to AmericaOne, they let the team try a scaled down version of its America’s Cup keel design on their SC 50 Gone with the Wind, a boat Paul bought 8 years later and raced the 2008 Pac Cup with his kids.

“Paula was just one of those people you were always happy to see. I will miss her.”

Bill Hoehler, Foundation Secretary/ Treasurer, will remember Paula not only as a force in her family, in her business and in our Foundation, but always as “Party Central”.

“She was upbeat with a “we can do it” attitude that was infectious and a joy to have on the team.”

Paula was a very good sailor and fearless; she was one of the first attendees of the US Sailing Woman’s Offshore Sailing Clinic. She skippered a women-only Tahiti cruise and always had room on her houseboat at Tinsley Island for Women’s Cruise attendees. Off the water, she taught countless friends to play mahjong. She was a peripatetic traveler and cruiser, she LOVED the Giants and Spring Training in Arizona, she was the grandmother supreme, and she created and sold a pension support business. Her contributions to the Foundation were constant and considerable. Some will remember that when money was being raised for the J/22 fleet, Paula would not let the team out of the room until everyone had pledged something. Not only was she fun and extremely generous, she was a perpetual source of out of the box ideas and had the organizational skills to make them happen.

We will miss her.