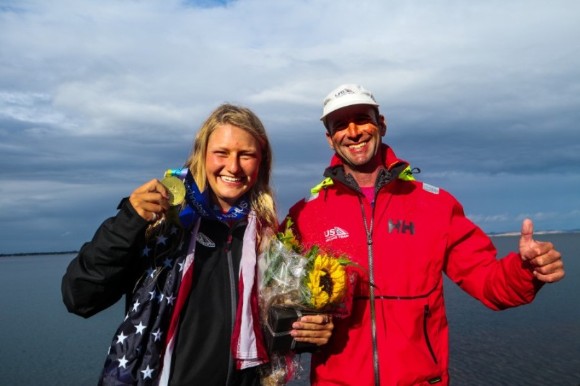 The US Sailing Team has completed racing at the highly anticipated 2018 Hempel Sailing World Championships, which concluded in Denmark’s second largest city on Sunday. The U.S. walked away with three country qualification spots and a much deserved Gold Medal for kiteboarder Daniela Moroz (Lafayette, Calif.) who captured first place honors in the Women’s Formula Kiteboard competition.

Moroz had one of her best performances yet even amidst constantly changing weather patterns across the courses. She won 14 out of 16 races this week. This marks the third consecutive World Championship title for Moroz. The talented kiteboarder has won the Hydrofoil Pro Tour in 2016 and 2017, the Women’s Formula Kite World Championships in 2016 and 2017, and recently the 2018 Formula Kite Europeans in Warnemuender, Germany. Moroz attributes her success to her extensive support system as well as her “do what you know how to do” mindset.

Her coach this week in Denmark, Robbie Dean (Sausalito, Calif.), is a leader in the kiting world, having started the Hydrofoil Pro Tour in 2015. The inclusion of kiteboarding into World Sailing’s Olympic Class events started at the 2014 World Cup Abu Dhabi, UAE, while Aarhus 2018 will be the first Combined World Championships to include hydrofoil kiteboarding.

“The idea that we’re being included amongst other Olympic classes pre-2024 is validation that our sport is growing, and with the results that USA has achieved at this 2018 Worlds, it’s validation that we, as a country, are doing it right,” notes Dean, who also coached four promising young male kiteboarders. Read on