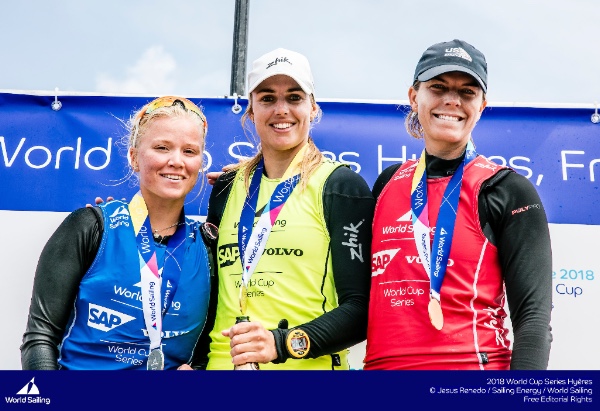 US Sailing Team athlete and two-time Olympian Paige Railey (Clearwater, Fla.) last weekend took home the bronze medal in the Laser Radial at World Cup Series Hyères 2018. Railey recently committed to campaigning for Tokyo 2020 in the women’s one-person dinghy, in which she has enjoyed a long and successful career at the international level. The Floridian sailor was near the top of the elite 64-boat fleet all week in France, winning three races in the 10-race qualifying round before finishing 8th in Sunday’s medal race. 2017 US Sailing Rolex Yachtswoman of the Year Erika Reineke (Ft. Lauderdale, Fla.) also made the medal race in the Radial, and finished 6th overall.

“The medal race was a bit crazy.  I thought I was over the [starting] line early so I [re-started],” said Railey,  “I just climbed back into it, and instead of getting stressed out about medals I just focused on one moment at a time, kept hiking, and just kept sailing hard.”

Railey has only been active in Olympic class sailing for about six weeks in last 20 months since the Rio 2016 Olympics concluded, and said that her results in Hyères were personally encouraging. “I decided to campaign for Tokyo [2020] because I’ve achieved almost everything you can achieve in the Radial. The last missing piece is an Olympic gold medal. If I can secure that, I think I  can walk away saying I’ve done everything you can do in this boat,” said Railey, a record five-time Laser Radial World Championship medalist.

US Sailing Team Laser Radial athletes have been working with a new coach since 2017, 2004 Olympian and Star class world and European champion Steve Mitchell (Toronto, Canada). “Coach Steve has been a key person for me this year,” said Railey. I’ve been fighting an uphill battle since I decided to come back. There were some physical setbacks, but he set up a process and keeps me sticking to it.”

Railey and Reineke have been training partners under Mitchell, as the US Sailing Team continues to emphasize a team-centric development model under Chief of U.S. Olympic Sailing Malcolm Page (Newport, R.I). “Erika and I agreed to be training partners after I got back into the boat,” continued Railey. “We’ve had great chemistry and are pushing each other. The hard work is paying off, and it’s great to have two Americans in the top six at a World Cup event. We want American Laser Radials to be a force to be reckoned with.”