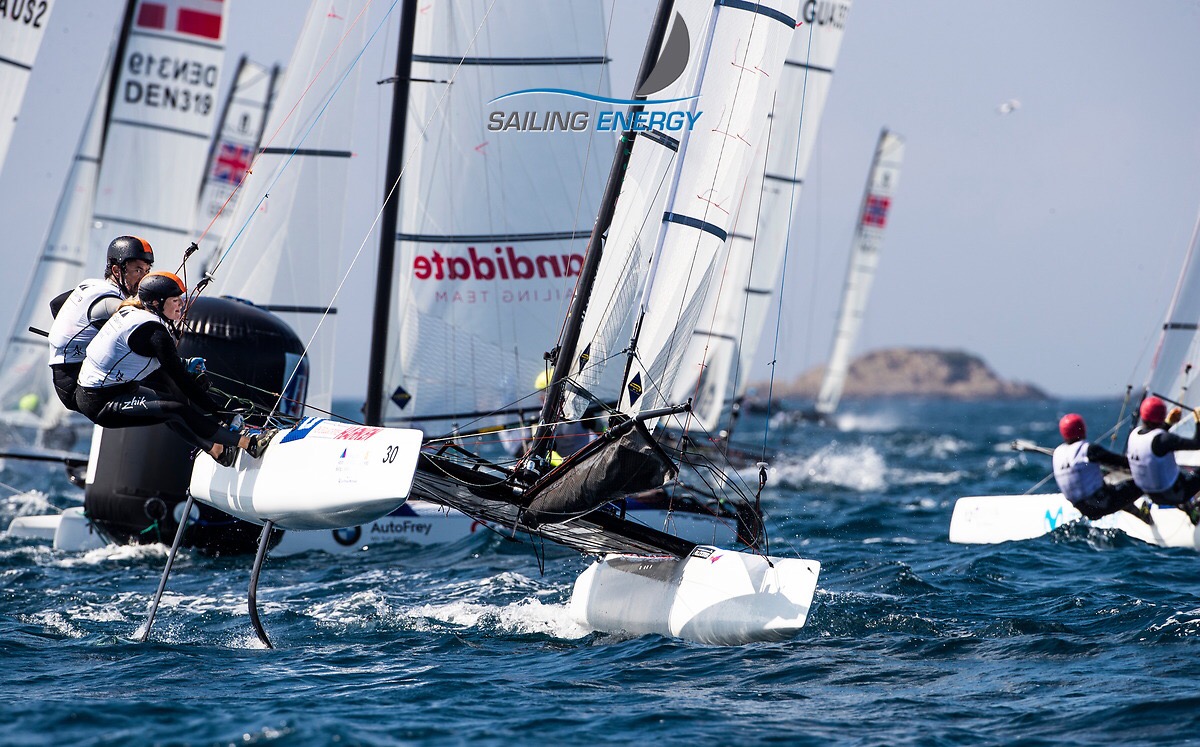 It’s been a tough start to the year for Nacra 17 Olympic hopefuls Helena Scutt and Bora Gulari. The pair recently competed at the Sailing World Cup in Hyeres, France (April 24-28) where they finished 22 out of 30 – not the result they had hoped for but not surprising after Scutt broke the middle metacarpal in her right hand during a January training session in Buenos Aires which required surgery for the insertion of a permanent titanium plate.

The USOC, the Elite Athlete Health Insurance, and their National Medical Network provided Scutt with great care which included a week at the Olympic Training Center in Colorado Springs after surgery where technology was used to bring the swelling down as fast as possible. Scutt was able to start physical therapy and enjoy their (incredible) gym.

“I have to say the whole process was too familiar, having had carpal tunnel release surgery on both hands by the same surgeon there, and staying at the OTC for a week in August 2015,” Scutt reminisced wryly. “I focused on putting the frustration and disappointment of a second Gulari/Scutt team injury aside, instead channeling my energy into getting back on the water safely as soon as possible. I focused on physical therapy, rest, nutrition to heal the bone, workouts, extra exercises to avoid imbalances after injury, fundraising, and logistics so that upcoming time in Europe could be focused on training and racing.”

Scutt attended the Foundation’s annual auction in late March where she delivered a moving speech (there was barely a dry eye in the room) and following that she took on three days volunteer coaching at a Nacra 15 clinic in Long Beach, Calif., a win-win for Scutt and attendees alike. “The kids’ energy and excitement were contagious,” Scutt reported.

Less than 7 weeks after Scutt’s surgery, she and Gulari we were able to get back on the water, this time in Barcelona. Scutt, sporting a custom hand brace, had to make some compensations for the lack of grip strength in that hand but nonetheless it was a huge relief – they were able to train.

“By being smart about the type and amount of training, we had no issues returning to training,” Scutt said. “Our 7 days in Barcelona with Riley Gibbs/Louisa Chafee and Argentinian gold medalists Santi Lange/Cecilia Carranza was a success.”

Next up was Hyeres for three days of training before the World Cup Series. The first day of racing was very light and after a bad start, at the top mark, the pair just missed the last puff strong enough for foiling downwind and did not make the finish time window for the only race that day. The second day of racing started with a black flag for disqualification for Gulari/Scutt. In the next two races they took 23 and 11, after two good starts but in a tricky breeze. The third day of racing was light breeze again and the pair scored 23, 17, 12.

“Since we haven’t been able to train much in that transitional condition, our ability to improve boatspeed throughout the day was promising,” Scutt stated. “On day 4, we finally had great boatspeed upwind but we have potential to improve downwind speed a lot. We finished 6, 11, 16, and 22, which was a good turnaround from the earlier part of the regatta. It keeps us hungry for more!”

In just their second regatta as a team, Scutt said she and Gulari are learning a lot about communicating with each other. It was also their first regatta working with coach Mike Ingham, the Nacra 17 squad coach for the US Sailing Team. “We’re excited about his perceptiveness, knowledge and dedication,” Scutt commented.

In mid-May, the Gulari/Scutt team trained for two weeks in Long Beach during which time they also joined the US Sailing Team Camp in San Francisco. They’re looking forward to getting back to work and logging hours on the water, with a view to their next regatta, the World Cup Final on June 3-10 in Marseille, France.

“All of our focus is on building up to the Aarhus World Championships starting August 5,” Helena said. “Thank you to the Foundation for its 2nd quarter grant in support of our Nacra 17 Olympic campaign!” 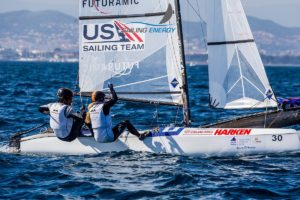