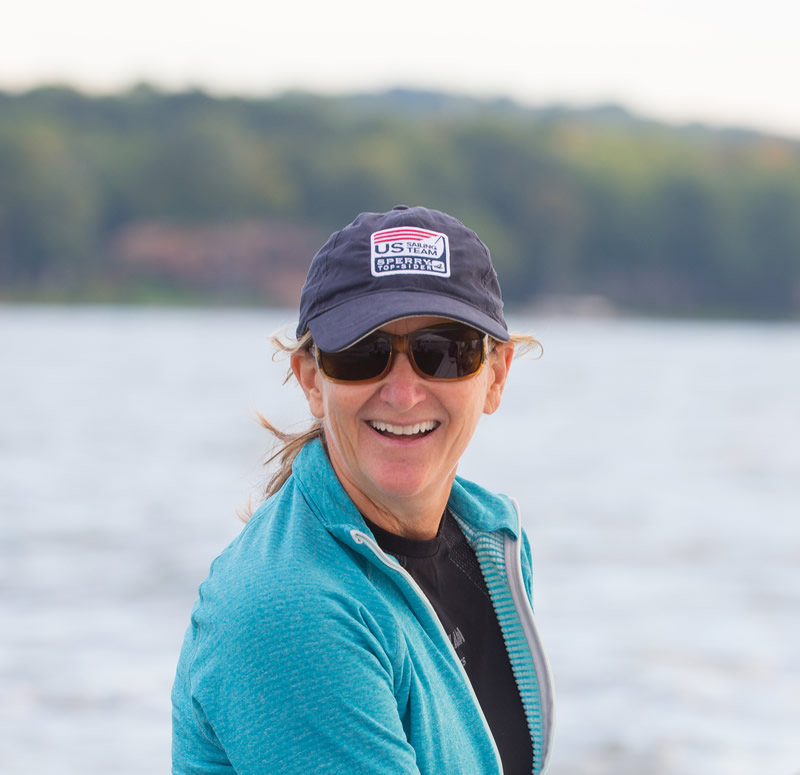 St Francis Sailing Foundation caught up with JJ Fetter, Foundation advisor and two-time Women’s 470 Olympic Medalist, recently back from the US Sailing Leadership Forum in St. Pete Beach, Florida. Here she shares highlights from the Forum, as well as her thoughts on getting kids into the sport…and keeping them engaged.

Was there one particular topic at the Forum which received a lot of attention?
JJ: I thought one of the big topics that seemed to get a lot of buzz was the fact that we were celebrating 30 years of women in Olympic sailing, which was super fun on a personal level. I got to see some of my former competitors like Allison Jolly and Lynne Jewell (the pair won gold in the 470 at the ’88 Summer Olympics in Korea and the only American sailors, male or female, to win a gold medal at the Games. I also caught up with Pam Healy who I went to the Games with in 1992, as well as Kris Stookey and Louise Van Voorhis (who represented the US in the ‘96 Games in the 470), so it was really fun to catch up with old friends.

Cory Sertl (alternate on the ’88 Olympic team and vice president of US Sailing), who was also part of that group of women who were training and competing against each other in 1992, organized a really cool thread that ran throughout the Forum focusing on women, like the Women in Sailing Leadership Session. Pam was on that panel with Cory, Lynn Handy and Amanda Callahan. The session was standing-room only with a good percentage of men attending! It definitely seemed to be a topic people were talking about in the hallways and at the cocktail parties.

How was the subject of participation in sailing addressed?
JJ: The great thing about the Leadership Forum, I think, is that it is evolving into a forum where organizations with creative programming are bringing ideas and solutions to some of the issues in our sport, like participation. The US Sailing leadership is doing a good job of identifying those program directors and coaches and bringing them to the group. The sessions were all very collaborative where people were encouraged to share things their organization has tried, shared contact information etc. There was a lot of talk about how junior programs have equal numbers of boys and girls up to a certain age, then girls’ participation really drops off. Some stories that were shared indicated that girls want a more social sailing environment and team aspect at a younger age so maybe less inclined to go the solo Opti route – they would rather have a double-handed boat introduced earlier so they can stay with their buddy.

When you take a good hard look at the high school and college programs, the fact is that many times there are unequal opportunities for tall athletic bigger girls in those programs unless they want to sail a Laser Radial. It would be great to expose those girls to trapeze dinghies. Showing those girls a very cool high-performance boat is one of the great things that the St Francis Sailing Foundation is doing with its supported clinics. The Foundation is leading by example in supporting female Olympic aspirants. It provided crucial support to many of our female US Olympians at the Rio Games including Marion Lepert, Helena Scutt, Briana Provancha and Paige Railey. And, it is identifying and supporting the next generation of talent — the 2016 Rolex Yachtswomen of the Year, Daniela Moroz, and the 2017 recipient Erika Reineke are both Foundation grantees.

What kind of youth programming do you think should be available?
JJ: In our youth discussions it was addressed that we need to be careful in programs that try to do a one-size-fits-all approach. There will be the kids who want to go the high-performance route, those who will want to do the adventure sailing route, others who want to sail the round-robin tactical kind of boats, and kids who want to be the next Charlie Enright and go around the world. We need to make sure the kids are exposed to all those aspects of our sport and are building the skills at age-appropriate stages so that they can go wherever they want – kiteboard, cruising, racing, whatever. I embrace the fact that our sport has all these different avenues.

Additionally, an important challenge for the future of our sport will be to expand and include a more diverse population. One important solution is to increase access through community sailing programs. St Francis Sailing Foundation is taking a leadership role here by supporting programs at the Treasure Island Sailing Center in San Francisco, like “Set, Sail, Learn”. Last year, the program introduced sailing to over 1,500 fourth-graders from the public school system. A large percentage of the kids are Hispanic, and many come back for the two-week summer course. The Foundation is providing scholarships to 80% of those kids.

Do you think it is more complicated today for kids to put their “everything” into the sport?
JJ: Kids are getting pulled in so many different directions and an Olympic campaign for example, has become such a full-time professional endeavor in a way that it wasn’t back in my day. And I’ve seen that at every stage. When I was sailing varsity in college and recall the amount that we practiced, the kids in my junior program now practice as many times a week as we did, and college kids are practicing as hard as many hours a week and training in the gym many hours as I did for my first Olympic campaign! Everything is just ramped up exponentially. I think the Olympic path – and I know I am biased – is so rewarding. There is truly nothing like competing against the top sailors in the world at a regatta where all competitors are at the peak of that sport. When you are on that starting line at the Olympics, every competitor knows what the other has sacrificed for that goal. The respect that you have for your competitors, the respect they have for you and putting it all on the line in a regatta where there’s no “do-over”, it’s an amazing experience. And, it’s so cool to know that right now, half of our US Sailing Team squad is female!

Where should the focus be to improve US sailing success at the highest level?
JJ: Living in Southern California, I am super excited that LA is going to host the 2028 Olympics – Long Beach is a great place to sail. When the Olympics were here in 1984, the US won silver or gold in every event and to me, that is the goal we should be working toward – thinking about what we can do to get the US back on the podium in every class by then. A well-integrated training center is important to that end. A key part of developing Olympic sailors is to keep inspiring the kids and exposing younger sailors to cool, fun high-performance boats and let them experience how fun it is to sail a planing dinghy or trapeze on a 29er or Nacra, and to try windsurfing. As the late, great Bob Billingham would say, “Plant a lot of little seeds”, to see which sailors are willing to put in the work and have the passion to develop their skills. Pam Healy is doing an amazing job of organizing clinics that plant those seeds.

We also need our sailors to put more time in on the water but for that to happen, we need to give the sailors the resources they deserve as professional sailors. Everyone needs to get out their check books and support Olympic sailing, support their local campaigners and regional programs that are supporting Olympic sailors and US Sailing’s Olympic program! 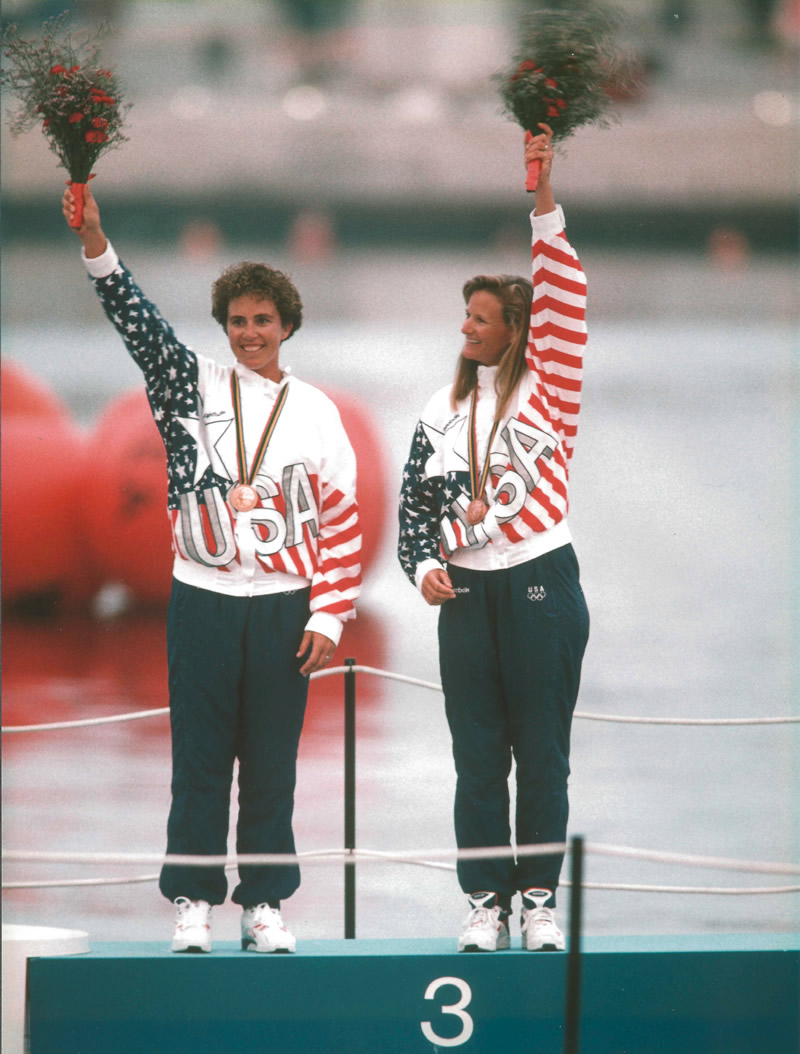 Michelle SladeLooking out for the success of our future sailors – a conversation with JJ Fetter02.22.2018