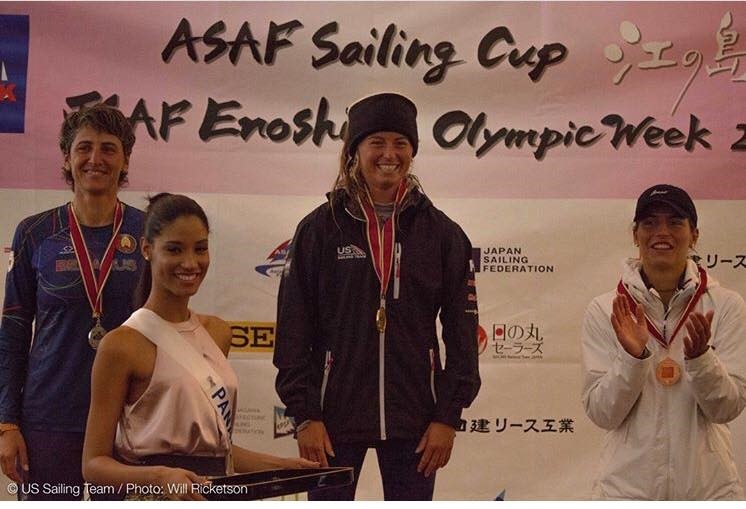 The St Francis Sailing Foundation caught up with Laser Radial sailor Erika Reineke, recently back from training and competing abroad. The 24-year old is feeling pretty dang good about life after taking gold in Japan at the Enoshima Olympic Regatta: “Even though peaking for this event wasn’t the goal of the trip – it was to familiarize with the venue – I was very happy to come home with gold!” she said. “It was an incredibly amazing feeling to win a championship at the venue where the Games will be held in three years.”

Erika’s tour started in Barcelona, Spain, at the Radial European Championships where she finished in 6th place. “The venue was absolutely beautiful with sunny skies and big swell every day,” she described. “The regatta was particularly challenging because of the top-level competition and for a few of the days, the swell was so big that it was impossible to see the pressure on the water. Sometimes the fleet was completely hidden in the troughs of the waves.”

She had a somewhat unique experience while in Barcelona as the Catalonian political movement to become an independent country was in full force: “The streets were filled with protesters all day and night. Racing was canceled on the first day of the regatta because the Race Committee decided to protest in the streets instead of run races.”

From the Europeans, she flew to Gamagori, Japan for the first regatta of the 2018 World Cup Series where a series of typhoons put a literal damper on racing. “The weather was not as beautiful as Barcelona however the Japanese people left their mark on me,” Erika commented. “They were so kind and always willing to help. As I wandered lost and confused through the train stations, so many people offered to help me get to where I was going. It was nothing like taking the subway in New York City, where people just walk by without a care in the world.”

After a week-long regatta of gray skies and rain, a good result in the Medal Race moved Erika up to 5th place to finish off the World Cup Event. The US Team continued its stay in Japan, taking a six-hour bus ride from Gamagori to Enoshima and Olympic Week which concluded the 2017 season. Her plans over the next few months include hitting the gym hard until the Miami World Cup Event in January. She’s grateful to everyone who has supported her journey thus far, with a special call-out to the St Francis Sailing Foundation: “Thank you again to the Foundation for their interest in my dream of gold at the 2020 Games and continued support as these results would not have been possible without their help!”

Graduated from: Boston College in 2017 with a Bachelor’s Degree in Environmental Geoscience.

Grew up sailing: In an Opti at Lauderdale Yacht Club on the Atlantic.

Knew early on that she wanted to sail at a high level: “I was exposed early on to elite athletes through my diving, swimming, volleyball and sailing coaches, and was positively influenced by their infinite amount of passion and drive. I saw their medals and I wanted what they had. By age 12, I knew I wanted to be an Olympian and the only way that was going to happen was if I committed to becoming a student of the sport.”

Why the Laser Radial: “People always say sports are a game of inches and the physical aspect of the Laser Radial epitomizes that. It is the slowest, most physically demanding boat that gives such little reward in the end for all the effort you put into it. In other words, you hike so hard only to gain a few boat lengths. As a result, pushing through the physicality of the boat becomes a mental game. I fell in love with the combination of the physical and mental aspects of the boat because, to me, this is what the Olympic sports are all about. Sheer grit.”

Favorite training partners: Her sister Sophia Reineke, and Pernelle Michon. “ I have the most fun with them and they are great sailors and competitors. Surrounding myself with people who love the sport as much as me can only lead to a fun time on the water.”

Next big event: Miami World Cup Event in January: “I am so excited to sail in my home state!”

What it will take to win gold in Japan: “Having fun while giving it my all the next three years.”

When she’s not sailing: “I love to spend time enjoying life with the people I love. My best friend and little sister, Sophia, is the best thing in my life. Our actions and laughter might not make sense to other people but we understand each other completely.”

On inspiration & motivation: “You are only given one shot at life and I believe that I am fulfilling my purpose by using the gifts that God gave me to pursue my dream. Additionally, I am so grateful and fortunate that I am able to do what I love. This is what gives me the motivation to be the absolute best I can be.”

Tips for young sailors who want to follow your success: “Be someone you want others to look up to, no matter what success or adversity comes your way. If you live by that on and off the water, you’ll have success in anything you do. Remember to smile. Doing what you love is supposed to be fun, so never lose sight of that.”

Michelle SladeAdventure and Success on the Olympic Journey11.21.2017