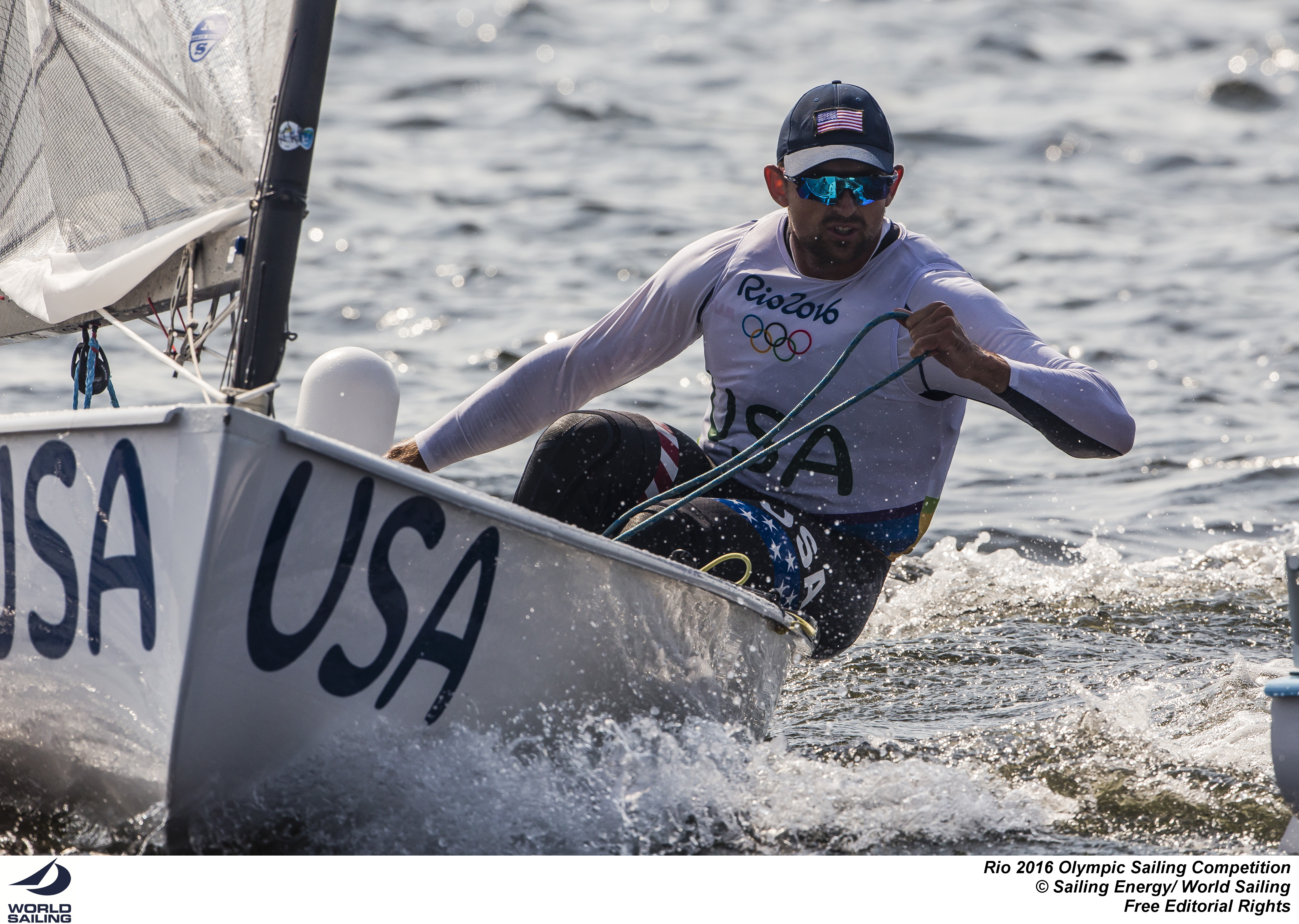 26-year old Caleb Paine cast an end to the dry spell for US sailing when he won a bronze medal in the Finn at the 2016 Rio Olympics, the first US medal in sailing since 2008. Paine took some six months off after Rio feeling a definite need to just kick back and enjoy his well-earned prize while also testing out the “real world” before jumping into the next go-round. He’s just now ramping up training and is looking forward to the 2020 Games: “I want to move up the podium and take gold! That’s the whole goal. This may be the last Olympics for the Finn so I am going to do everything I possibly can to make that happen.”

MS: What DO Olympic athletes do after the Games?
CP: It’s an interesting question to ask in the US for sure. Depending on the country you are from, you typically have a lot of resources to back you up and it’s easier to transition into other campaigns. Look at Peter Burling (NZL), Giles Scott (GBR) – guys who were medalists in their (Olympic) classes went onto the America’s Cup, the Volvo, etc., because they have federation backing. They’re easily able to transition into something else between Olympic events. Sailing in the US, if you stop Olympic sailing, the funding doesn’t continue so there was this lull for me after the Olympics, I had to figure out how I was going to afford the next couple of months.

MS: When does training start over for the 2020 Games?
CP: Some people go all the way through and continue training. I trained for six years for the last Olympics, I was super burned out and didn’t have anything left to put back into it so took time off. Now is the time that people are slowly trickling back in so I’m hoping to get together with training partners soon. You want to be the best and be with the best, beating the best.

MS: You recently moved from San Diego to San Francisco – what are you hoping to accomplish there?
CP: I moved specifically to train. I was also fortunate to be a grantee of the St Francis Sailing Foundation which was always a constant throughout my campaign. Past Olympians sit on the Board and many great sailors are involved, people who can help with anything from legal to fund raising. They offer the entire package which is huge, especially when things get a little shaky, they make the difference when things get really tough. They also share the same goal as I do – bring medals home for the US, it’s an awesome thing.

MS: It can’t be all work…what are you doing for fun on the Bay?
CP: Well, I live on a boat at the Richmond Yacht Club – a Nauticat 33, a little motor sailor with a pilot house, not a fast sailboat but I’m okay with that! I’m on fast boats all the time. It’s great and the club is amazing, they help me out a lot, it’s a 5-minute walk to my boat and I can be sailing in the Berkeley Circle in 30 minutes. It’s hard to beat. Having done only Olympic sailing for the last 6 years, I’m finally trying to explore other avenues – anything I can get my hands on. I recently trimmed main on the Open 40 California Condor Buzz which was a blast. I’d love to explore foiling, giant Mod 70s, Volvos – any of that, as well as other aspects of sailing like match racing and team racing.

MS: Did you always know this is what you wanted to do?
CP: I started sailing Sabots in San Diego when I was very young. When I was about 5-6 years old, I found out that sailing was in the Olympic Games. I decided then I wanted to go to the Olympics. My whole life slowly got me closer and closer to that goal. Did I always think I was going to win? No, but to have the self-belief that you are is something entirely different. I just believed I could do it if I put in the time, energy and effort. I was fortunate enough to meet people like Bill Kreysler (President, St Francis Sailing Foundation) who helped me out a lot in the beginning and Chris Frackiewicz from New York. Without these sponsors there’s no way I would have made it happen. It’s amazing for me to look back and know that those guys saw something in me that even I didn’t really know I had.

MS: Was your Olympic campaign a college trade off?
CP: In the US, the thought is that you can do both. When I was in high school, I decided that there was no way I could dedicate the time needed to do both school and sail to win a medal. You’re either going to do both half assed and not being truly successful at either, so I went full-time sailing. A testament to that is that I was the only one to win a medal in the 2016 Olympic Games. Looking forward, it’s a balance – do I pursue my career in professional sailing which is the only way in the US that you can continue in the sport, or do I retire at some point, go to school, get a job and go that route? The one thing I have learned about myself is that I like the independence that you learn through an Olympic campaign – it teaches you a lot of skills which have helped me see better ways of doing everything I am doing.

MS: What are some of the challenges you’ve experienced on the Olympic trail?
CP: Ensuring that your living expenses are covered and stuff like that is an important part of a campaign and it can take away from contributing to your final goal which is to win gold. Another challenge is learning how to prepare for the event, and the only way to do that is to go to a lot of events but all that travel and organization can take away from good solid time on the water.

MS: What would you do differently to improve your training?
CP: I’ve had a lot of time to reflect looking back at the campaign and how I would do things differently, how would I improve. The biggest jumps in my ability came about after long training camp blocks. I have become very good friends with the Canadian guys and we basically moved to Florida for four months during the winter. We sailed every single day and that is when I made a massive jump in my skills. I plan on doing fewer regattas this fall and doing many more days on the water. I think that’ll be better for me.

MS: Are you overwhelmed at going into another Olympic campaign knowing what you do?
CP: No, I am excited about it. The only thing I’m a little nervous about is the fund-raising but I’m in the process of making proposals. Nonetheless, there’s still that uncertainty factor, just not knowing how it will all come together.

MS: What DOES it cost to do an Olympic campaign?
CP: A ballpark figure would be $150K/year prior to the Olympics, then the Olympic year probably $200K, so roughly half a million dollars for a full campaign. I think I needed more money to do what I think I needed to win gold. 70% of the campaign is just boat handling and training, going sailing all the time and knowing what it takes, knowing how to set up in a start, knowing that routine, that’s a huge part. 20% of it is the logistical aspect, the last 10% is just boat speed, that’s focusing on squeezing every little bit of speed out of the boat – for sure there are gains to be made but that last 10% is the most expensive part too, LOL! It’s a funny balance.

MS: What is important to you in your training?
CP: Great coaching is huge and I think that’s one of the things that US Sailing is doing well now under Malcolm Paige’s guidance. He’s got more people involved and is getting great coaches to try to put American sailing back on top. That’s the other thing too, there are plenty of great sailors out there who perhaps don’t have what it takes to get to the top but at the same time they make good coaches. When I’m coaching Finn sailing, on the other hand, there are some things that I keep to myself because that’s my own hard work – they don’t need to know ALL my secrets! Training partners are also important to me. They got me to where I am now. It’s a lot of blood sweat and tears, you push each other to total breaking point. Some of my fondest memories of the Olympics and leading up to the campaign is the time I spent with those guys. I’ll take special trips to Toronto every now and then just to see them because they are truly my best friends.

MS: Just how hard do you need to work at getting to – and staying – at the top in this sport?
CP: I see guys who work hard but you have to work even harder than you think to be at the very top – I think it’s something I didn’t fully realize until about 9 months before the Olympics. I had kind of a dramatic Olympic trials with Zach Raily the silver medalist from 2008 coming back to sailing, it came down to the last race…just knowing he was there definitely pushed me and got me to think of things in a different way which in the long run helped me tremendously. It has changed how I will approach anything for the rest of my life. The Olympics will do that and it’s pretty special to be part of that.

MS: Who do you consider your mentors?
CP: My parents Doug and Connie Paine, and my sponsors Bill and Chris. Chris was a Polish immigrant who came to America with $46 in his pocket and now he he’s very financially successful, a great role model. I happened to meet him at the boat park in Clearwater, FL, and he liked what I was doing. Then, we had the Finn Gold Cup here on the Bay in 2010. We were out in front of the St FYC and I was just wheeling my boat up. A gentleman comes up to me and starts looking at my boat. He introduces himself as Bill and said he used to sail a Finn. Turns out we are both from San Diego, Bill’s parents had a house in Point Loma and Bill was a member at the same yacht club I was sailing for, he went down to the junior program where I was working at the time and said,”I have met Caleb Paine and I want to buy him a boat”. Without meeting Bill I wouldn’t have had the new boat I needed – LOL! I was able to get funding from US Sailing and slowly moved my way up, then Chris bought the boat I sailed in the Olympics. Without those guys, there’s no way it would be possible. It’s one of the coolest things about sailing, you meet the best people, it’s awesome. I have friends all over the world and am very fortunate to have met the people I have – they have been a large contribution to what I have been able to achieve.

**Olympic campaigns are expensive. Anyone wishing to help can go to https://www.stfsf.org/contribute/donate/**