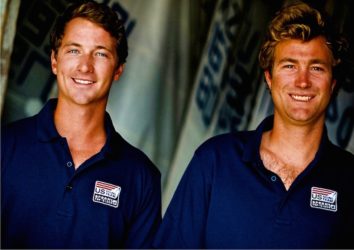 Thomas Barrows and Joe Morris have earned selection to Team USA for Rio 2016 Olympics. The pair have been together longer than any other active U.S. 49er team, and have diligently worked their way up through the ranks over the past three years by training heavily in all weather conditions.

A principal strength of Team Barrows / Morris is a strong preexisting friendship, which has carried them through the moments of doubt and adversity that characterize many Olympic campaigns. “Thomas and I were good friends in college, and sailed against each other all throughout high school as well,” said Morris, a four-time All-American and five-time national champion in various classes. “We had a great opportunity to team up for this Olympic campaign. We started out at a pretty low level, and came a long way over the past couple of years. He’s the best teammate in the world, and there’s nothing else I could ask for.”

For Barrows, this will be a second shot at the Olympic podium, having represented the U.S. Virgin Islands in the Laser class in 2008, before starting to sail under the U.S. flag in the 49er.

The FoundationThomas Barrows and Joe Morris01.31.2017