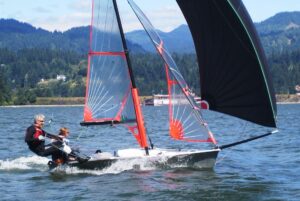 Paul has been a lifelong sailor starting on the East Coast in New Jersey and sailing on the Princeton sailing team, but he found his sailing home in San Francisco Bay when he moved west after medical school. He’s sailed dinghies, windsurfers, foiling windsurfers, and today would like to see succeed at wing foiling. He’s raised to two world class kiteboarders: Johnny and Erica Heineken.

For 10 years he was a volunteer at the Cal Sailing Club, which introduced him to the Treasure Island Sailing Center (TISC), where he is now on the Board of Directors. He’s been a member of the St. Francis Yacht Club for many years, where he helped develop its leadership role in racing on windsurfers and kiteboards. He became Commodore in 2019. There aren’t many Commodores of yacht clubs, especially at the status of the St. Francis Yacht Club whose specialty is board sailing…Full podcast here.