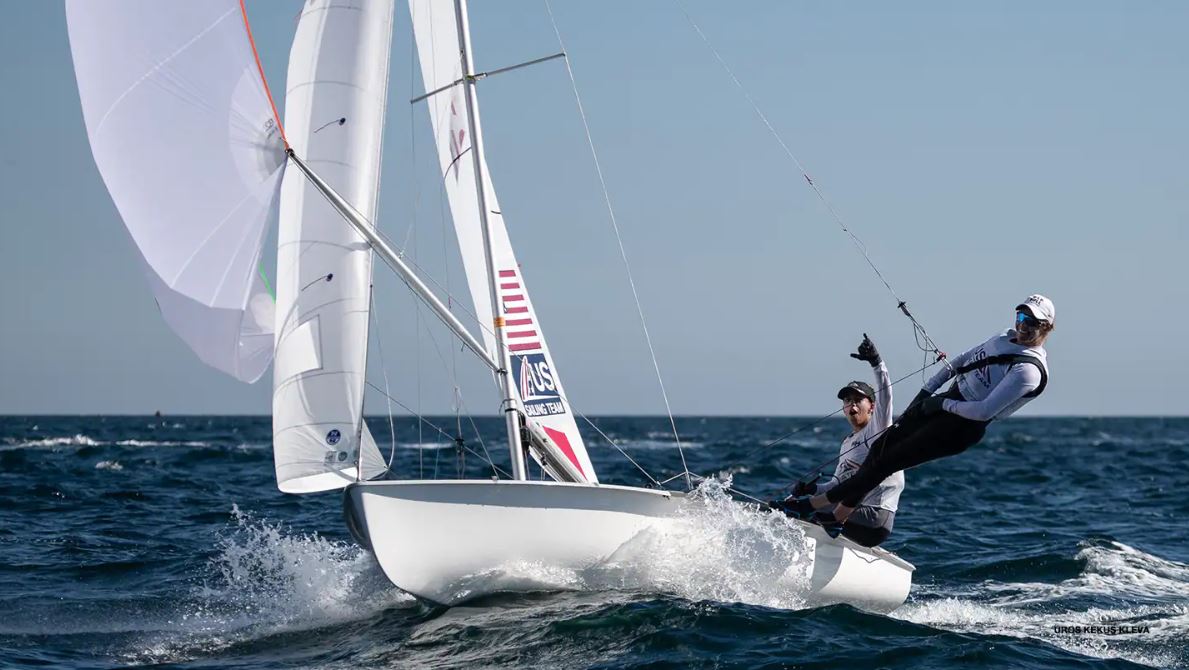 “I felt pure focus, I knew exactly what I had to do in terms of performance, so it was a matter of executing all of the small things that string together at the right time from the race start to finish,” Lara Dallman-Weiss commented, recalling her feelings at the outset of the race that really counted, the final race of the 2021 World Championship and the qualifier that would secure them a place on the US Sailing Team headed to the 2020 Tokyo Olympics.

The Olympic Trials for Nikki Barnes and Dallman-Weiss / Perfect Vision Sailing were a combined total of three regattas, with the 2021 Worlds they just completed being the final qualifier. Prior to the 2021 Worlds they were behind the two other teams vying for the sole spot on the US team: Nora and Atlantic Brugman, and Emily and Carmen Cowles. They were three points behind the Brugmans and two points behind the Cowles. Barnes and Dallman-Weiss had to beat each of these teams by the number of places they were behind them to qualify.

The defining moment for Barnes and Dallman-Weiss was before the start of the final race of the World Championships. They had two races that day and in the first race defended hard, starting low in the box to be prepared for the other girls to either send us over the line early or anything to get them disqualified – “Normal starting tactics – anything to attack,” Barnes noted. But the Cowles sailed well, finishing 5th and Barnes and Dallman-Weiss finished 18th.

“We were a bit angry with how we did,” Barnes commented. “Going into the last race, we told ourselves that we were just going to do it. We decided to sail how we knew best to sail and make it a great last race. Either way it was the last race of a World Championship where women’s and men’s 470 would be separate.” *1

They started the race well, rounding the top mark in 10th, with the Cowles a couple of places in front. They saw pressure on the inside and stayed close with that top group until the pressure was close then jibed. The pair enjoyed some great boat handling and at the bottom mark rounded in 6th. On the second upwind they were able to play the same pressure they saw coming down to pass two or three more boats and rounded in third at the top mark with Germany 20 on their heels.

“We had to beat Germany 20 otherwise they would beat us in the overall results,” Barnes said. “We’d still be in the medal race, but it would give us that position closer to the Cowles. On the entire downwind leg, we were keeping an eye on them. It was a very physical race, really exhausting and got lighter at the end but we still had free pumping *2. We just kept pumping and sweating away, Germany 20 would come close, then we would advance…We got to the reach mark, we jibed through, but Germany 20 was still near us. We were just defending them at the end. Finally, we crossed the line.”

Finishing was surreal, Barnes acknowledged. She felt an enormous sadness as soon as she crossed the line that the regatta was over and that they had no more races other than the medal race.

“I bawled my eyes out and dry heaved in the back of the boat while Lara just smiled,” Barnes recalled, able to laugh now. “We didn’t know until later that day when all the protests were in that we got the qualification.”

“I felt a great sense of pride, we had just sailed a physical and smart race and we didn’t hold back, we did what we trained to do!” Dallman Weiss said. “I had a moment thinking we didn’t know if we would qualify but then quickly decided it was no longer in our control so we would have to wait for results. I really wanted to allow myself to feel good about the regatta we just sailed and the year we had just spent training regardless of the Trials outcome.”

Now home and training in Miami, the pair have been both working on their mental game with their respective sports performance and psychologist coaches. The emotional toll has been high these past months, with lots of nights tossing and turning, and mind-reviewing maneuvers.

“The week before the regatta Lara was very nervous so she was leaning on me a bit,” Barnes acknowledged. “When we went into the regatta, she was calm and steady, and I was leaning on her more. I was not sleeping, instead I just kept re-playing the start line. I would try to bring myself to a happier place, which for me is Disney World (laughs) but I would always end up at that darn starting line! I threw up from nerves on the first day which I have never done before.”

The pair know that their job is a long way from over, recognizing that they still have learning to do from big mistakes they made in the regattas, so they will keep pushing on the water…and off.

“When I wake up, I have a specific 15-minute meditation I do to set my intention for the day/week/month and regulate my breathing,” Dallman-Weiss noted. “This helps me focus for the day and not get caught thinking about the past or the future!”

With all the training that the Barnes and Dallman-Weiss have been able to do this past fall and winter, they’ve a good idea of what they are up against come show time in Tokyo.

“What’s cool is that we’ve been training with all of these girls – in Northern Spain and the Canary Islands this past fall so we got used to seeing them on a starting line.” Barnes said. “It’s been amazing to know these people – we’re not looking at Hannah Mills thinking, ‘that’s Hannah Mills, wow, and she has a gold medal’. We chatted with her a good amount in the Canary Islands. We are not defending anymore. The Trials made me so nervous because we had to defend getting that position but now everybody is on the same chopping block for the Games.” 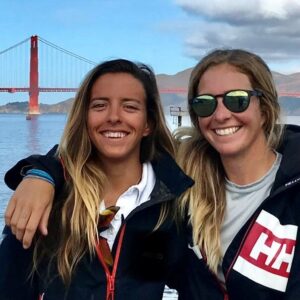 *1. The 470 will run mixed crews in the future.
* 2. Free pumping is a class rule that allows the use of free pumping or kinetics (to increase speed) in 8 knots+ as designated by display of the O flag.

Michelle SladeA Sigh of Relief to Qualify + Gratitude for the Opportunity to Compete = Stoked Sailors03.22.2021