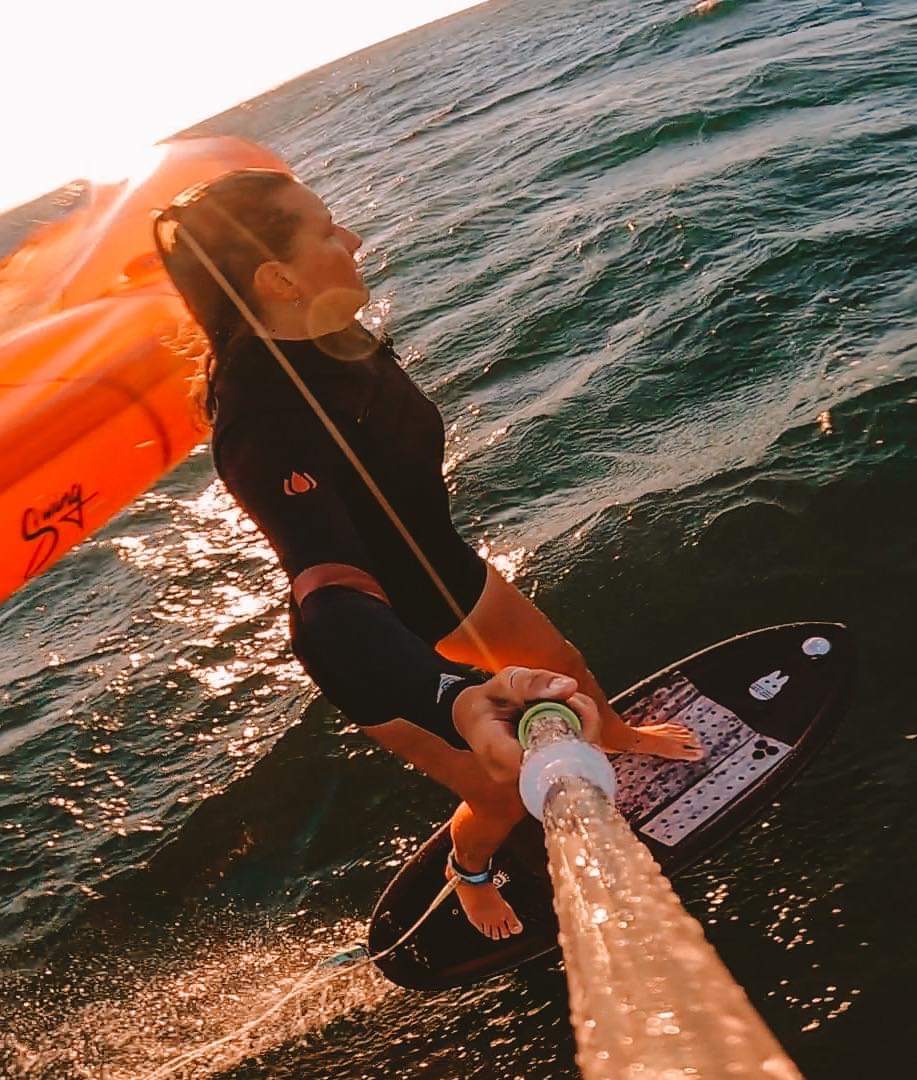 Catching up with Daniela Moroz, 4-time Kitefoil World Champion (2016-2019) and 2-time Rolex Yachtswoman of the Year (2016/2019), is always fun. She has a contagious smile, loves to laugh, is always relaxed (who wouldn’t be in her shoes!) and is more often than not enjoying life on the cutting edge.

I caught up with her in Los Barriles, a notable boardsailing venue along the eastern tip of Baja California, where we met at a new café in town. She ordered a chai latte and avocado toast…without tomato. “I heard the avocado toast here is really good, so I have to try it,” she enthused in her natural bubbly style.

Her latest passion is wing sailing, which for someone who initially thought it was dumb, this 19-year old has quickly changed her tune. She’s loving it.

When did you get into winging?
Back home last June at Sherman Island. I’m going to be honest. When I first saw a wing last year here in Los Barriles, I thought it looked really dumb.

Johnny (Heineken) and Sinbad (Cynthia Brown) were doing it as well as a few others but with the big boards; it just did not look appealing at all to me. My dad and a bunch of guys from Sherman started winging back in April-May, and by the time I came home from school at the beginning of June, they were all winging. They all said, “You’ve got to try it, it’s so fun!”

Sure enough, I had a blast at Sherman trying it. I switched to a much smaller board which made it a lot more fun for me. The big boards are bulky, especially coming from kite foiling where the gear is so minimal. So, after being super anti-winging for the longest time, here I am now really stoked on winging – I didn’t even bring kite gear down to Los Barriles with me!

What’s winging like, is it comparable to kiting?
I think it is probably the most accessible water sport to get into, even easier than surfing. It seems so much safer than kiting because you have less stuff going on; it’s simple. I think it’s more similar to windsurfing but nicer in that you don’t have a boom which gives you more freedom, and you can still foil which makes it more efficient. It’s a perfect gateway to everything else – you could start winging and go into kiting from there, or if you’re coming from windsurfing and you want to wing, it’s super easy.

What about the foil aspect if you are new to these sports?
I think in a perfect world, you learn to foil behind a power boat, like wakeboarding style, because that’s usually a calm environment with few variables, but if you’re coming from windsurfing and you understand how the wing works and how to power the wing, then it’s just a matter of figuring out how the foil feels.

What inspired the downwinder to La Ribera?
It was a really big wind day and I really wanted to do a downwinder while I was here as that’s the best way to wing, especially here in the swell; it’s soooo nice. I did a bunch in Hood River last summer – about 12 nautical miles. I would take my phone with me and share my location with friends so that they knew exactly where I was.

For La Ribera, I organized with friends to take dry stuff down with them to La Ribera as they were going there to wave kite anyway, and then I shared my location with them, and they did the same with me. I winged down – it was about 15 miles and my entire session was about 90 minutes but just to get down there was a little less than an hour.

What’s new with your kite training?
I was in Florida from November 20 to December 20 which was super fun. I didn’t kite that much as it wasn’t my focus for the trip, though I did coach some girls for US Sailing’s Olympic Development Program (ODP) which was fun getting them on foil kites and comfortable foiling.

The main purpose was because I’d never been to Miami and the US Sailing Center. I didn’t grow up sailing and didn’t go through the normal sailing pathway so I wanted to see how things were run, how the different teams are campaigning, and learn from that. I really wanted to meet people and talk to them about their campaign experience, see how the different teams are training, what’s working, what isn’t, and absorb as much as I could.

You did some boat sailing in Florida?
It was such a blast. I knew I wanted to hop in a couple of different boats while I was there, follow the teams around and learn from them. That worked really well. I spent 3-4 days with Riley (Gibbs) and Anna (Weis), and their coach Sally (Barkow). I sailed on their Nacra 17 for a couple of days and really liked it; it’s something different.

Do your kite skills transfer to sailing boats?
Not really, though it’s easy to hop onto a boat, especially if it’s a 2-person boat as you then have someone telling you what to do. It worked out great that it happened to be Riley, who is a really good kiter, because he could compare everything to kiting.

I was mostly crewing so my main job was trimming the mainsheet and in the end it’s the same idea – sheet in to get more power and sheet out when you need to de-power. It was just a matter of figuring out the timing of all of that. I had to really anticipate whereas with kiting everything is immediate – as soon as you sheet in you feel it right away.

In the Nacra I had to be 5 steps ahead and be prepared for a puff that is way off in the distance, so you had to already be sheeting in to be in the right position to take advantage of it. With kiting you are still anticipating that kind of stuff but it’s more immediate. That was all really interesting.

I also went out with Dane (Wilson) and all the 49er boys one day – I actually REALLY like the 49er. The trimming was more precise and I felt like it needed more attention than the Nacra – I really liked that aspect of it.

Do you ever see yourself racing boats?
I could never see myself sailing a boat because there’s so much rigging and you go so slow, you put so much effort into going so slow compared to kiting, and it’s so expensive. But after sailing the 49er, I thought the FX could be quite fun…I did hop in the FX one day with Erika (Reineke) and Lucy (Wilmot) which was really fun.

Kiteboarding will make its Olympic debut in Paris 2024 with hydrofoil boards. Formula Kite will be the official kiteboarding class with a mixed format that includes men and women. Have you got a partner to race with in 2024?
I think in the US right now we have a huge opportunity to medal with kiting. There are a bunch of guys that are definitely going for it but it’s not like boat racing – we don’t know yet what the details will be but the kiters will campaign individually and the best guy and the best girl at the end of the qualification period will be selected.

What happens next?
I will probably officially launch my 2024 campaign in June. Between now and then, I will be setting up the stuff that I need to go “live” with my campaign (big smile) – not just on the training side but also on the logistical campaigning side of things.

I’m supposed to go back to Florida at the end of January to train and do the Clearwater OCR at the beginning of February and after that, if I feel like I want to continue kite training, I will likely return to Baja to do some training and then do the Kite Pro Tour. Then there is a mixed relay kiting event back to back with the Princess Sofia Regatta 2021 in Palma in May. After that I don’t know as the IKA (International Kiteboarding Association) calendar still hasn’t been confirmed.

Do you have a coach?
Not right now but I’m probably going to start working with one this year – I have been talking to a few different people including Torvar Mirsky, the 2017 World Match Racing Champion. He lives in Palma which is why I would like to get there, perhaps do a training regatta first and if that partnership works then we could do the Europeans and Worlds together.

He does quite a bit of kiting and I think he would be really good with tactics and strategy which I think is my biggest area for improvement. ODP will be providing some coaching and support for some training camps and they’re hiring Gebi (Michael Gebhardt) and Charlie McKee to coach us in Florida at the end of the month which I think will be super interesting. There’ll be about 10 of us – some of these kids have their eye on 2024, some of the younger ones won’t be ready for 2024 but lining up for 2028.

How does school (University of Hawaii) fit into all of this?
I did the fall 2020 semester and will be doing the spring 2021 semester online. The fall was really fun – I was living my best surf bum life and surfing every day in Los Angeles living in my van. It was super awesome and I got arguably some of my best grades this past semester.

For this upcoming semester I have two Zoom classes about three hours twice a week which will definitely be a little more tricky but I’ll figure it out. Spring semester starts on January 11th and if at the end of February I find I need a break from kiting after the training block in late January, I may go back to Hawaii and live with my friends and do college.

I definitely miss that social aspect of college and all my friends I met there the first year. Right now I’m pretty keen to keep training, come back to Baja with my race gear and train here. I know a couple of the Europeans want to come to Baja so I’d have some really good people to train with.

How do you finance all of this?
That’s the question, isn’t it! (laughs). I get that in the US as we have to do all the fundraising ourselves. I am fortunate in that I am relatively well-known and have very good connections at the St Francis Yacht Club and St. Francis Sailing Foundation which I am really grateful for. I feel like I have a really good community supporting and backing me there. As I put together my Olympic campaign, figuring out fundraising will be a big part of that…

Sidenote: Our conversation turns to discussion about breakfast which has just been delivered to the table. “Hmm, this is definitely better avocado toast than the other coffee shop!” Daniela concludes. 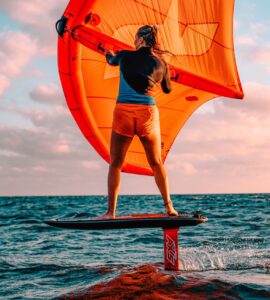