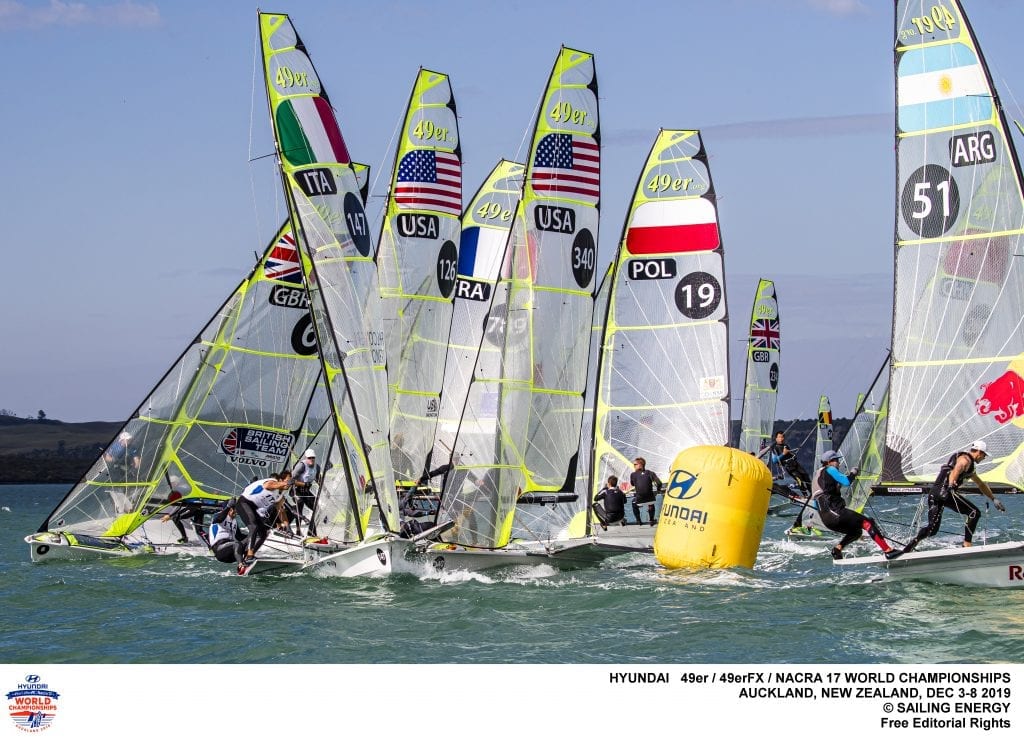 Racing in the 2019 49er, 49erFX and Nacra 17 Worlds is underway in Auckland, New Zealand, an important event for nations that haven’t qualified yet for Japan 2020, and/or for nations that are using the Worlds to determine who represents them. The USA has qualified in the FX and Nacra but not 49er, and the country is using the 2019 and 2020 Worlds to determine who represents the country in those classes.

Today’s results from Auckland are encouraging for US sailors. After four races in the 49erFX and Nacra classes, Paris Henken (Coronado, Calif.) and Anna Tobias – both Foundation grantees in previous Olympic campaigns – are leading the 49erFX fleet. Riley Gibbs (Long Beach, Calif., current Foundation grantee) and Anna Weis (Fort Lauderdale, Fla.) are in third in the Nacra 17 fleet.

In the 49erFX class, Olympic sailing veterans, Henken and Tobias, had an incredibly consistent day at the top. While they were campaigning part-time early in the quad, they have a lot of experience under their belt. Henken represented Team USA at the Rio 2016 Games in the 49erFX and Tobias (formerly Tunnicliffe) is the Beijing 2008 Gold Medalist in the Laser Radial. Now that they have been full-time campaigning for over a year, it’s clear the hard work is paying off.

The pair finished two races in first and the final race of the day in fifth. Henken attributes their successful day one on the water to keeping it simple, “We executed the starts really well and had some incredible boat speed which we have been working on all month, here in New Zealand.” She continued, “Our priorities were to minimize maneuvers and just keep the boat going fast.”

It seems keeping it simple is the name of the game in New Zealand. Though Nacra sailors, Gibbs and Weis didn’t have any cake incentives on the water, the pair also had a consistent day at the top with three finishes in the top three and all scores within the top five.

“We kept it pretty simple today,” said Gibbs. “We tried to keep our bows clear of any traffic. Making high-percentage moves around the racecourse gave us the ability to sail in more clear air than our competitors. We seem to have decent speed and when we’re sailing in a good lane, going the right direction, we’re definitely not slow.”

While Gibbs and Weis felt some of their decisions were little conservative, they are pleased with their first day on the water. “As they say, you can’t win the regatta on the first day, but you can definitely lose it,” said Gibbs. Read full story: https://www.ussailing.org/news/19worlds-49erfxn17/