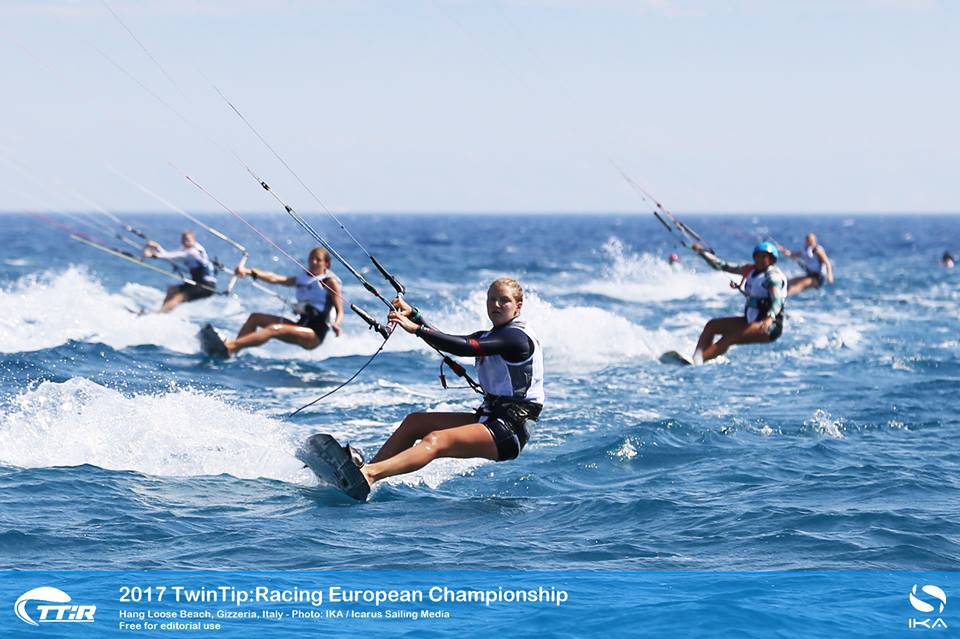 With the 2018 Youth Olympic Games in Buenos Aires, Argentina, on the horizon, 15-year old Daniela Moroz changed gears this past week, switching out foiling gear for a twin tip and inflatable kite to compete in her first twin tip racing event – IKA TT:R Kitesurf European Championships, held in Gizzeria in southern Italy.

The Formula Kite World Champion and Rolex Yachtswoman of the Year had just a couple of sessions on a twin tip and inflatable kite on her home turf, San Francisco Bay, before heading to Italy, so she was stoked with her result: 2nd overall in Girls Under 19 class.

“I’ve never twin tip raced before, and other than those practice sessions, the last time I used a twin tip was when I learned to kite about four years ago!” Daniela said, with her signature grin. “Honestly, I did not expect to do very well at all just considering I hadn’t been on a twin tip in years and was really unfamiliar with the whole format. My goal was just to practice, and, also see how good the European girls are. I did not race against any of the girls that I foil with.”

Moroz performed solidly the first three days of the event, leading the Girls competition. Her goal was to stay as consistent as possible and win every heat but the format posed some challenges, as she explained.

“The challenging part about this elimination format is that you could have one wipeout in one heat, but it could put you out for the rest of that round if you didn’t finish in the top 4 in that heat. When the obstacles were introduced I had some trouble because I’m not at all used to jumping a twin tip, while all the other girls are freestylers that jump (and do tricks) all the time. Throughout the entire week I wiped out twice, but because those wipeouts were in the heats that qualified you to the final heat, they cost me first place and about 20 points.”

On the race course, twin tip racing is done slalom style, while foiling is regular course racing, like sailing. Moroz has a few thoughts about foiling versus riding twin tips acknowledging that transitioning from a twin tip to a foil is extremely challenging. But, she says, going from a foil to a twin tip just feels like going backwards…given there is much less speed and maneuverability involved.

Kiteboarding has been accepted into the 2020 Tokyo Olympics as a demonstration/exhibition event and the discipline will be kite foiling, much to Moroz’ delight, with the format and equipment (kind of foils/kites) yet to be confirmed. Meanwhile, Moroz plans to continue TT racing with an eye on the 2018 Youth Olympics; the qualifying event for North America will be in January.

Traveling the world and competing at high profile events has plenty of perks including the opportunity to check out world class kiting spots most kiters only get to dream about.

“The event venue was an amazing kiting spot, probably one of my favorites I’ve ever been to,” Moroz enthused. “The wind was super consistent, flat water, and both the outside air and water temperature were really warm. The food (and coffee!) was amazing. After the event, mom and I flew to Rome and were tourists for a day. It was a really fun trip, and I hope I can go back there next year!”