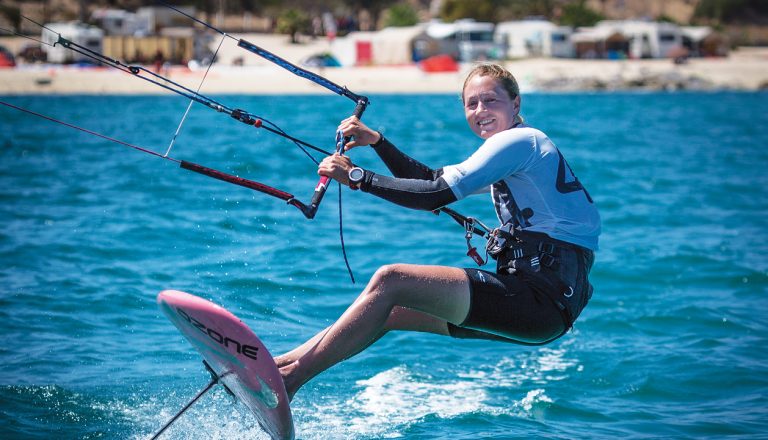 1. Where did you develop a passion for water sports?

My dad started windsurfing in the late 1970s and when my brother and I got to the age where we could learn to windsurf he immediately threw us on a board. Dad has also been a long time member of the St. Francis Yacht Club so we got on the water when we were very young. There are photos of me sailing on my parents’ boat in the Delta when I was a month old. Johnny and I learned to sail dinghies in the Richmond Yacht Club Junior Sailing Program when we were very young. I also coached sailing at the San Francisco Yacht Club for many years, and was on the University of Vermont sailing team.

2. How did you get into kiteboarding?

Once Johnny converted over to kiting, I saw how much progress he made in a short time and was convinced I had to switch as well. I learned on a trip to Costa Rica one winter when I was in college — what started as a surf trip turned into a kiting trip. I ended up changing my ticket to stay for a month to learn to kite and became pretty competent. I returned home, bought kites and the rest is history.

3. Do you think other sports you played helped you develop as a kiter?

I have played volleyball really competitively since fourth grade and through two years of college at the D3 level. I don’t know how much transferred over to kiting but definitely the competitive spirit did. I am quite competitive when it comes to the top level!

4. What have been your biggest accomplishments in kiteboarding?

I won the World Championships (2012 in Cagliari, Italy, and 2013 in Boao, China), on the Formula Race Board, and I won a tour on the hydrofoil at a time when that form of kiting was very new.

5. What was the most well-earned award?

The first World Championship I won was in Sardinia, Italy, in 2012. It had just been announced that kiting would replace windsurfing in the Olympics so not only was there way more attention all of a sudden internationally at this regatta but it was also the year Johnny and I won the world titles together.

6. How often do you get to hang out with brother Johnny?

We see each other more in the summer when it’s kiting season, and during the winter we try to make time to take our dogs, brown labs who are sisters, for hikes and throw a Frisbee for them.

7. How do you stay in shape and specifically for kiting?

When I’m sailing I try to exercise outside — hike, bike and kite. I’m at the top of my game in the summer when I’m kiting as I’m getting all the exercise I need. We sometimes ride our bikes home from work in the city and I love that. In the winter I try to squeak by with just sailing on weekends and going to the gym but that’s more for my mental health.

8. How do you juggle a career while competing as an elite athlete?

It’s not easy. For about four years I was very focused on kiting and used all of my free time to compete internationally. Now I’m re-evaluating that decision after not kiting for the past nine months and considering how intensely I want to go back. Luckily my work has been flexible enough to allow me to take extra time off.

9. What is your philosophy now that you have a baby; will you stay active in the sport?

We’re not going to try to change our lives too much. Cody will be in tow with us wherever we go (laughs)! Whether he likes it, we’ll have to wait to find out. He’ll go to daycare when I go back to work but on the way home, the beach is between work and home and his grandparents are just down the street so luckily we have a lot of help so I think we’ll still manage to get back into our kiting routine a few days a week.

10. What’s your advice and encouragement for women wanting to learn how to kite?

Being comfortable in the water is No. 1 and skills from other board sports will really accelerate the process but isn’t required. It also pays to learn to fly a small trainer kite before taking a lesson.