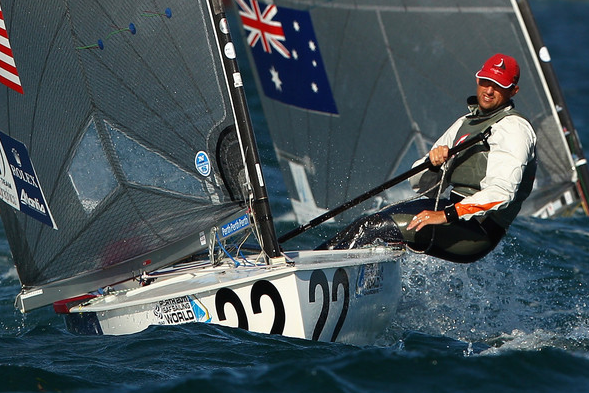 Finn sailor Caleb Paine is on fire!  Currently ranked 1st in the country and 5th in the world, Caleb’s notable finishes this past year include 1st at Finn North Americans, 5th at Sailing World Cup Hyeres, 7th at ISAF Sailing World Championship in Santander and 3rd at the ISAF Sailing World Cup Final Abu Dhabi. At the ISAF World Cup in Miami last month, Caleb qualified for the medal race and placed 9th overall. Caleb attributes part of this success to his Foundation advisor Bill Kreysler and the St. Francis Sailing Foundation.

Caleb has been sailing his entire life and started racing at the age of 7. After finishing high school, Caleb decided to put college on hold so he could pursue his lifelong dream of winning an Olympic gold medal. He bought a Finn sailing dinghy and began competing full time in 2009. In 2011, he was selected for the US Sailing Team Sperry Top-Sider and has since been climbing the world ranking in preparation toward his goal.

The most challenging aspect of Caleb’s quest for an Olympic medal has been financial resources. It took him 5 years to get a new mast and boat made to his specifications. Last year, with Bill Kreysler’s help and financial assistance from the Foundation, Caleb has had more resources to refine his equipment and spend more time sailing in Rio de Janeiro and other parts of the world to hone his skills. It’s paying off: the results have been spectacular.

“Rio is just around the corner and my current successes are largely due to the St. Francis Sailing Foundation and its members. I look forward to the new year to continue my progress and get closer to achieving my goal of Gold in Rio 2016,” Paine commented.