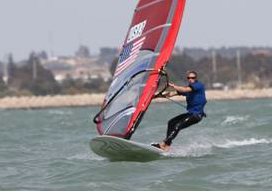 Farrah Hall (Annapolis, Md.) qualified the USA for a Women’s RS:X berth at the world championship, completing full qualification for the country at the 2012 Olympic Games.
“Our team is excited that we have now qualified for the Games in all Olympic and Paralympic Classes,” said Dean Brenner, Chairman, US Sailing’s Olympic Sailing Committee. “Farrah did a great job, and we’re proud of the fact that we’ll have a full squad in Weymouth.”
Hall was equally pleased with her performance at the Worlds and qualification. “I feel that I’ve met my goals for this event, and I’m really happy to have finalized my Olympic spot,” she said. “We had a really tough event, and I’m relieved that it’s finally over! I’m also happy that I’ve made a real breakthrough in planing conditions.  I still need more practice in survival conditions to learn technique, but now I’ve got the mentality that I can dominate the equipment and sail aggressively and make maneuvers without fear in 30+ knots. Going to the Olympics this round really means that I’ve found some success. I’m excited to be representing the USA at the Olympic Games and I feel that I have the chance to make a real impact as far as results go.”